Through the Shadows by Karen Barnett 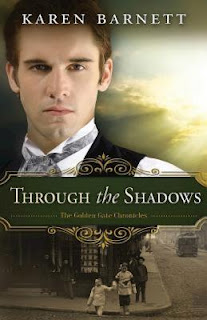 The devastating earthquake is just two years past, but the city of San Francisco is still trying to recover. Destruction of this magnitude is not so easy to overcome-and neither are the past regrets shadowing Elizabeth King's hopeful future. Hoping to right her wrongs, Elizabeth dedicates herself to helping girls rescued from slavery in Chinatown brothels, even if it means putting her own life at risk to sneak through the gloomy alleys and rooftops where dangers lurk. Putting her life on the line for a worthy cause is admirable. But opening her heart is even more terrifying. So when Elizabeth meets attorney, Charles McKinley--a man who dreams of reforming San Francisco's crooked politics--Elizabeth begins to doubt: Can she maintain her pretense and hide her past? Or will her secret jeopardize both their futures?

I'm a well-known cover slut, so it should come as no surprise that the first thing I noticed about Karen Barnett's Through the Shadows was the jacket. I was excited enough to see a model with their head intact, but a male model? Flying solo? Fully clothed? No one does that! I want to award the Abingdon Press artist who designed this image a gold star, but that said, I've mixed feelings about the story itself. When push comes to shove I liked the idea, but the execution missed its mark.

Before the angry mob of ardent fans arrives with their torches and pitchforks, I'd like to go on record and say that there is nothing inherently wrong with Barnett's writing. It didn't suit my tastes and there's nothing wrong with that so let's all play nice and leave the ugly accusations about how I shouldn't be reading Christian fiction out of the comments section okay? I like grit, tension, and genuine ambiguity and while I felt Barnett's story touched on some very compelling material, I can't deny that the presentation never led me to believe the characters wouldn't find their happily ever after. I greatly admire the author's imagination and intent, but I found her tone too soft for my liking.

Aside from that, I was both surprised and impressed with the author's highlighting of Donaldina Cameron. I was not familiar with the Angry Angel of Chinatown prior to encountering her fictional counterpart, but the character fascinated me and I caught myself doing quite a bit of sideline research into the life and work of the Presbyterian missionary who rescued more than three thousand Chinese and Japanese immigrant women and girls from indentured servitude and sex trafficking. Historically speaking, I think this material incredibly important and I applaud Barnett for integrating into her fiction.

Charles and Elizabeth didn't do it for me, but I found their story pleasant enough for other reasons. The series is written in standalone installments, but I'd recommend reading the books in order as Barnett includes cameo scenes and follow-ups on characters featured earlier in the Golden Gate Chronicles. The series incorporates heavy religious themes and might not be the best choice for those readers who struggle with nonsecular material, but I'd certainly recommend Through the Shadows to those who don't.

The function of 920 is to rescue girls and women from sin and suffering. I don’t believe our duty is to the Chinese people, alone, but to all of God’s children. And who can better understand than one who has walked through the shadows of sin and been redeemed?”

I just saw your review of Through the Shadows on Amazon, and I wanted to thank you. I appreciate thoughtful reviews, even when they're not glowing. Everyone's style is different, right? Thanks for taking the time to read and review Shadows. I'm glad you enjoyed learning more about Donaldina Cameron and her work with the Presbyterian Mission. After all the research I've done, she's become a personal hero to me. Happy reading!