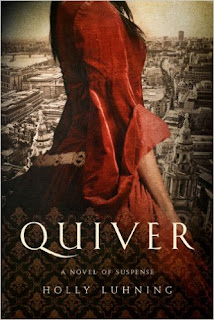 In sixteenth-century Hungary, Countess Elizabeth Bathory tortured and killed over six hundred servant girls in order to bathe in their blood. She believed this practice would keep her skin youthful and her beauty immortal. Quiver tells the story of Danica, a forensic psychologist who works at a former insane asylum-turned-forensic hospital. one of Danica's mental patients is Malcolm Foster, who is imprisoned for murdering a fourteen-year-old girl. Foster is a menacing but fascinating patient and Danica begins to suspect that Foster may have been the head of a gothic cabal idolizing Bathory. Her peers dismiss her discoveries, while disturbing incidents begin following her home from work. Soon after her arrival in London, Danica receives a mysterious note from Maria, a seductive archivist with whom Danica has had an intriguing and complicated past. Maria claims she has Bathory s diaries that chronicle her relentless torture of young women. As Maria increasingly insinuates herself into Danica s life, soon Danica is in too deep to notice that Maria s motivations are far from selfless; in fact, they may just cost Danica her life.

Luhning’s writing is pretty decent for a debut, but I can’t bring myself to go any higher than three stars. She is definitely on the right track, I don’t want to come off as discouraging, but the basic construction leaves much to be desired. More than that though, I think the marketing department failed her in that they set the book up to be something it simply isn’t.

I’ll come back to the construction issues later; I want to address the marketing issues first. Quiver is advertised as a thriller. No offense to Luhning or her publisher, but I wouldn’t shelve this next to The Girl with the Dragon Tattoo or Angels and Demons. It just isn’t that kind of book. I personally feel it would do better if it were marketed as a contemporary mystery. Quiver is a decent story, but it doesn’t have the edge of your seat momentum you would expect from a suspenseful whodunit or even the psychological drama of say Silence of the Lambs. Classifying it as such sets an expectation that the book just doesn’t achieve.

Similarly, I think the blurb makes too big a deal out of the Bathory. This isn’t her story in the same way that the Da Vinci Code isn’t the story of Mary Magdalene. I don’t know who makes the decisions regarding cover blurbs, but I think whoever created this one misstepped in relying too heavily on the drawing power of the Blood Countess. The name dropping ensures you will sell copies, but people who pick up the book expecting to find sixteenth century Hungary aren’t going to be impressed with present day London, relationship drama and art exhibitions.

Since I’m already dissecting the blurb can someone please explain to me exactly which “discoveries” Danica’s peers disregard? She brings up her concerns only in the final chapters of the book and while she is blown off, I don’t think her employers were unjustified considering their assessment of her mental state and the time her information was given. And what are the “disturbing incidents” that seem to follow Dr. Winston home after hours? So far as I can tell the only incidents that affect Danica involve Henry’s philandering and in all honesty, cheaters are a dime a dozen. Either I somehow overlooked several chapters worth of information or we are again over exaggerating the content.

The plot felt disjointed, a good idea but there wasn’t enough to really get into Danica’s story. There wasn’t enough Foster to be disturbed, there wasn’t enough jeopardy to evoke alarm and there wasn’t enough suspense to keep the audience guessing (Not to toot my own horn, but I called the ending midway through the reading). The Bathory diaries were interesting but they are short, limited in scope and few and far between. I felt myself asking which story Luhning was trying to tell. The psychological aspects of both the present day cult and the historic mistress who inspired it are literary gold, but neither was satisfyingly fleshed out.

This is really one of the books you want to go into with little or no expectations. It isn’t bad, but I think those who pick it up with an open mind will garner more enjoyment than those whose interest is sparked by the description of content.

I pull the red card out of my purse, type gyilkosság into an online Hungarian-English dictionary. Gyilkosság is murder. 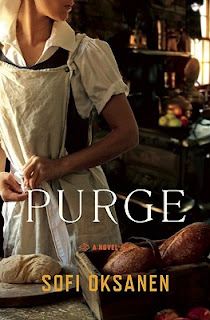 An international sensation, Sofi Oksanen's award-winning novel Purge is a breathtakingly suspenseful tale of two women dogged by their own shameful pasts and the dark, unspoken history that binds them. When Aliide Truu, an older woman living alone in the Estonian countryside, finds a disheveled girl huddled in her front yard, she suppresses her misgivings and offers her shelter. Zara is a young sex-trafficking victim on the run from her captors, but a photo she carries with her soon makes it clear that her arrival at Aliide's home is no coincidence. Survivors both, Aliide and Zara engage in a complex arithmetic of suspicion and revelation to distill each other's motives; gradually, their stories emerge, the culmination of a tragic family drama of rivalry, lust, and loss that played out during the worst years of Estonia's Soviet occupation. Sofi Oksanen establishes herself as one the most important voices of her generation with this intricately woven tale, whose stakes are almost unbearably high from the first page to the last. Purge is a fiercely compelling and damning novel about the corrosive effects of shame, and of life in a time and place where to survive is to be implicated.

Even now, a few days after finishing Oksanen’s Purge, I am not sure how exactly how I feel about the story. Well, that’s not entirely true. I know how I feel. It’s sort of an “eh, umm, huh” kind of feeling. Problem is that doesn’t give me much to work with when comes to constructing a review.

The murky undertones of the piece are provocative to say the least, but I think the graphic nature of the content is a bit of a turn off for those unwilling to examine or even acknowledge the dark underbelly of society. From Zara’s treatment as a trafficked sex slave to Aliide’s experiences both during and after Soviet occupation, the story is designed to make you think about survival, shame, enmity and dishonor in terms most of us have never considered. Personally, I like that Oksanen isn’t afraid to go where she does. I’m not necessarily drawn to the explicitness of her work, but I can appreciate the technique as necessary in exploring the themes of the piece.

Despite my admiration for the emotional content of the book, I felt it lacking in other areas. For example, I feel the exploration of human nature took precedence over character development. Oksanen presents Zara and Aliide in a very straight forward manner and try as I might, I couldn’t find it in me to accept the impersonal depictions of individuals experiencing such extreme circumstances. I think that establishing a connection between the characters and the reader would have really enhanced the power of what Oksanen was attempting to express through her narrative.

Additionally, I felt the writing style was difficult to navigate. Creatively artistic, but functionally problematic. Oksanen jumps between characters and time frames at will with little or no exposition. She throws bits of information at the reader, leaving them to piece together an often times incomplete picture of events. It is enough to understand what is happening but it is far from ideal.

Finally, I have to acknowledge the disadvantage I felt while reading Purge. I can’t speak for all Americans but our exposure to European history is rather limited. Prior to reading Oksanen’s work, I had only vague notions of the political events described in the book. I don’t blame the author for my lack of familiarity with the subject, but I think it is worth noting that book poses certain challenges for those less acquainted Estonian history.

She couldn’t brush it away like she ought to have done. Instead it seeped in between the wallpaper paste, into the gaps left behind by the photographs that she had hidden there and later destroyed. The fear settled in as though it felt at home. As though is would never go away. As though it had just been out somewhere for a while and had come home for the evening.