The Scarlet Queen by Jacqueline Farrell 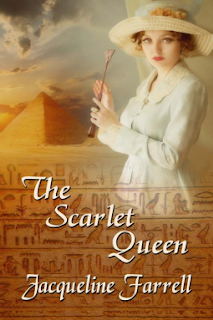 Egypt, 1900. Kate Whitaker is fourteen years old when she first meets Adam Ellis on her archaeologist father’s dig. They hate each other on sight. Seven years later, they meet again in London, and this time Kate falls in love with him, only to discover he is more interested in his older, more sophisticated cousin Alice. When Adam returns in Egypt to discuss funding for her father’s new excavations, Kate resolves to have as little to do with him as possible. But illness and malicious rumours threaten to sabotage the dig, and Kate has no choice but to work with Adam. Can she trust him, or is he still under the spell of his lovely, haunted cousin...?

Jacqueline Farrell’s The Scarlet Queen was marketed as a humorous romance on Netgalley. The cover struck me cheesy, but the lighthearted nature of the piece promised the sort of mental reprieve I’ve craved the last few weeks. I requested a copy, received an ARC almost immediately, and jumped in with what I hoped was an open mind.

The early chapters were amusing and several passages actually caused me to laugh out loud, but the momentum didn’t hold and I was soon struggling to remain engaged in the narrative. I wish I could say more about the historic details, but Farrell doesn’t offer her readers much to go on.

I found young Kate mischievous and energetic, but her adult counterpart didn’t have the same degree of self-assurance. Her pride and assumption annoyed me in the end and I ultimately cared very little for her character. Adam proved an interesting contrast to his leading lady, but his humble intelligence and wit could not carry the story alone.

When all is said and done The Scarlet Queen was as well-suited to me and I was to it. I understand there is a companion piece, but I am not inclined to sample it and will be seeking my amusements elsewhere.

Before he could stop himself, Adam had bent over to examine the scroll more closely. That was when he called me an impudent chit. But not before I saw the look in his eyes. I was right, and he knew it.