Author interviews are one of my favorite things to post which is why I am super excited to welcome author David Blixt to Flashlight Commentary to discuss book one in the Star-Cross'd series, The Master of Verona. 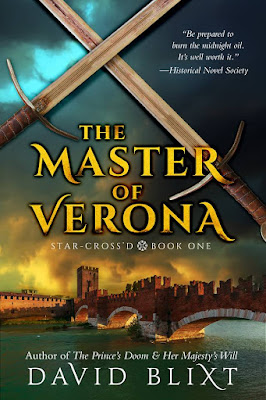 Welcome to Flashlight Commentary David. It’s a pleasure to have you with us. To start things off, please tell us about The Master of Verona.
Delighted to be here. This novel was recently called “Romeo & Juliet meets Game Of Thrones”. I hope it’s not quite that bleak, though combining characters from Shakespeare’s Italian plays with the real people of Dante’s time, things aren’t always going to end well. Paradise beckons, but first you have to go through Hell.

At risk of sounding impertinent, where did you find this story? Did it strike like lightening out nowhere or was is something that came to you over time?
Like all great ideas, it came to me in the shower. I was about to direct Romeo & Juliet, and the idea of the feud’s beginning leapt out of my head like Athena, fully-formed and armed. It was only later, diving deep into the research, did I find that Dante mentions the Capulet-Montague feud in the Divine Comedy. Which means that Dante was in Verona during the birth of the feud. So was Giotto. So, a little later, was Petrarch. The feud became a thread in a larger tapestry of the birth of the Renaissance in Italy.

The Master of Verona was originally published ten years ago, but you recently revisited the novel to record the audiobook. How did it feel to immerse yourself in this story after so long?
Surreal, both as author and actor. I can’t count the number of times I paused in the middle of some really long sentence to say, “Who wrote this?” The happy discovery was how much I enjoyed the story, especially the characters. Finding their voices was a real challenge, in a good way. There were also several things I had forgotten were in there, little allusions and nods to plays and poems, historical events and figures. And I was able to cut a little excess verbiage from the previous edition, so that this one flows better. A book is never finished, only published.

The Master of Verona brings together the characters from Shakespeare's Italian plays with the real people from Dante's time. Was it difficult to combine the two?
Actually, it took several running starts. I kept trying to write from the point of view of Shakespeare’s characters, but that felt trite. The lynchpin ended up being Dante’s son, Pietro. A very real person, with some solid facts about his life, yet with no real timeline for his early years. Through him I was able to link the historical and fictional characters. Right away he becomes friends with young Capulet and Montague, while at the same time he’s brought into the confidence of Dante’s patron, Cangrande della Scala, the titular master of Verona.

Do you have a favorite scene in The Master of Verona?
Two. I very much like the duel in the middle of the book, where Pietro’s sense of justice gets him in far over his head. And the final scene, which was as surprising to me as it has been to readers. No spoilers, but I’ve had friends show up at my house to curse at me after reading Chapter 40. I really like surprises, but only if they’re earned. Since that scene surprised me when I wrote it, the shock seems very honest.

Is there a character you felt particularly close to while writing The Master of Verona?
To this day Pietro remains my favorite character to write. I’ve been asked how much of me is in him. The answer is, none. Pietro is a far better man than I am. His sense of honor and need for justice are unfailing and unfaltering – and often unfortunate. Rarely is he rewarded for his dogged perseverance.

The other character that’s always a joy to write is Cangrande himself. Go to Verona and he still permeates the city. Dante dedicated Paradiso to him. Patron of the arts, clever warrior, skilled diplomat, famous lover - he was a figure for fiction because he’s larger than life. All the events in the book are real, he did those things. Creating a complex character out of someone so romantic and dashing was a huge challenge. It’s hard not to fall into hero-worship. Pietro certainly does. But if I’m following Shakespeare’s rules, there has to be a tragic flaw…

Authors are often forced to make sacrifices when composing their stories. Is there a character or concept you wish you could have spent more time on in The Master of Verona?
Oh, there are always rabbit-holes to dive down. The first draft was significantly longer, and my editor gave me one of the best pieces of advice I’ve ever heard: “David, you’ve confused what a writer needs to know to write a book with what a reader needs to know to read it, which is much less.” The research is so fun for the author, but sharing that research often bogs down the story itself. So I cut 100,000 words from the novel – just about a third. Some of the neat facts I held on to for the sequels, but most of it just vanished.

If you could sit down and talk with one of your characters, maybe meet and discuss things over drinks, who would you invite out and why?
Are we talking the historical people, or the ones I’ve created on the page? I’d love to chat with Dante, no matter what. Cangrande’s wife would be fascinating to talk to. And the fictional Moorish astrologer, Tharwat al-Dhaamin, would be my chosen companion for dinner. He’s a mystery to me, even though I invented him.

If you could pick a fantasy cast to play the leads in a screen adaptation of The Master of Verona, who would you hire?
Hm. Ten years ago, Hugh Jackman would have been Cangrande, hands down. Today? Chris Hemsworth. And so many of the leads are in their teens, making the cast change over every five years. So here goes:

What do you hope readers take from their experience of The Master of Verona?
A sense of awe. A sense of scope. And a deep desire to read both Romeo & Juliet and The Divine Comedy (as well as come back for the next novel in the series, Voice of the Falconer). 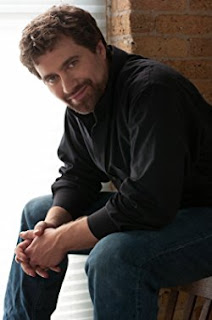 David Blixt‘s work is consistently described as “intricate,” “taut,” and “breathtaking.” A writer of Historical Fiction, his novels span the early Roman Empire (the COLOSSUS series, his play EVE OF IDES) to early Renaissance Italy (the STAR-CROSS’D series) up through the Elizabethan era (his delightful espionage comedy HER MAJESTY’S WILL, starring Will Shakespeare and Kit Marlowe as inept spies). His novels combine a love of the theatre with a deep respect for the quirks and passions of history.

Living in Chicago with his wife and two children, he describes himself as “actor, author, father, husband. In reverse order.”