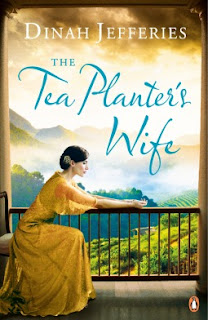 Nineteen-year-old Gwendolyn Hooper is newly married to a rich and charming widower, eager to join him on his tea plantation, determined to be the perfect wife and mother. But life in Ceylon is not what Gwen expected. The plantation workers are resentful, the neighbours treacherous. And there are clues to the past - a dusty trunk of dresses, an overgrown gravestone in the grounds - that her husband refuses to discuss. Just as Gwen finds her feet, disaster strikes. She faces a terrible choice, hiding the truth from almost everyone, but a secret this big can't stay buried forever...

Book reviewers are typically solo acts. We pick our books, read our selections, post our thoughts and repeat. We obviously enjoy it, but a lot of us crave debate and discussion when analyzing literature which is what led a small group of my friends and I to commit to a buddy read.

The selection process, as you might imagine, was rather amusing. Four book junkies, rifling through their TBRs, submitting title after title in hope that something would spark mutual interest. It took us a couple of days, but The Tea Planter’s Wife by Dinah Jefferies trumped every other submission. In recognition of our busy schedules, we committed to reading a few chapters a week and planned to open the floor for discussions every Friday. We started strong, but somewhere along the way our little group lost their momentum and the discussions trailed off. Evidence of our effort is available on Goodreads if you care to look and while I’ve yet to discuss the particulars with any of my fellows, I have a few theories as to why seemingly struck out.

Subtly isn’t something I’m known for so I’m just gonna come out and say it, The Tea Planter’s Wife is tediously slow. ‘Just keep reading’ became my mantra as I doggedly forced myself through the latter half of the narrative, but making the finish line awarded me no satisfaction. In point of fact, finishing the book made the experience even worse. When I stalled after chapter nineteen, I could speculate over the grand revelations that might be delivered in final climatic chapters… having finished the book, I can’t erased or reimagine the feeble culmination of Gwen’s experiences or the crushing sense of disappointment that was left in its wake.

Each member of the cast enjoys a moment or two of genuine intrigue, but taken as a collective whole Jefferies’ characterizations struck me as exceedingly thin. Every time I thought I was connecting with someone, that individual would either disappear from the narrative or sink into an extended period of self-pitying introspection. My eyes would glaze over, I’d groan, debate abandoning the book, berate myself for considering the notion, let fly a decidedly British expletive and force myself to keep going, but I suppose that admission is neither here nor there in the scheme of things.

Thematically, I felt Jefferies presentation insightful, but heavy-handed. Race relations in Ceylon are an integral part of Jefferies’ story, but I felt the Hoopers were forced into awkward situations in order for the author to explore social tensions of the day. The couple is preoccupied with their personal and professional lives for chapters at a time, far removed from the common Tamil and Sinhalese inhabitants of their community, but their existence is unnaturally punctuated by prejudice and while I appreciated what the author was trying to convey, I couldn’t help feeling the final product fractured and incohesive.

As stated, I can’t speak for Heather, Stephanie or Magdalena, but I personally struggled a great deal with The Tea Planter’s Wife. I did not enjoy the time I spent with this piece and would have great difficulty recommending it to other readers.

The truth in return for his life. It would be an exchange, a bargain with God, and even if it meant losing everything, she must confess or otherwise watch her son die.

I have this book from Netgalley and you just made up my mind on whether or not I will read the book. You know that as a fellow reviewer, we just don't have the time nor energy to read something that is not going to 'click' with us.