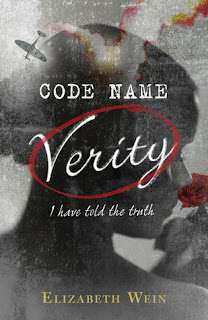 Oct. 11th, 1943-A British spy plane crashes in Nazi-occupied France. Its pilot and passenger are best friends. One of the girls has a chance at survival. The other has lost the game before it's barely begun. When "Verity" is arrested by the Gestapo, she's sure she doesn't stand a chance. As a secret agent captured in enemy territory, she's living a spy's worst nightmare. Her Nazi interrogators give her a simple choice: reveal her mission or face a grisly execution. As she intricately weaves her confession, Verity uncovers her past, how she became friends with the pilot Maddie, and why she left Maddie in the wrecked fuselage of their plane. On each new scrap of paper, Verity battles for her life, confronting her views on courage, failure and her desperate hope to make it home. But will trading her secrets be enough to save her from the enemy?

Phenomenal. There's a word I don't use lightly, but there is no other way to describe Elizabeth Wein's Code Name Verity. I hate sounding like a gushing fan girl, but the young adult surprised me in the best possible way. There are light notes, but the story itself is tempered by the dark realities of WWII and the end result truly remarkable.

Much has been said about the 2012 release, but few reviewers have mentioned Wein's characterizations. Verity, Maddie, Engel, and Millitrette are all strong in different ways. These women defy convention, but not one among them rejects their femininity and I think that an incredibly powerful message. I often see woman painted as homemakers or tomboys and I was profoundly moved to see an author reject conventional tropes in favor of something genuine, multidimensional, and authentic.

That said, Verity stands as a very special character. In contrast to most authors, Wein doesn't shove her headliner's savvy down the throats of her audience in some Sherlock Holmes inspired expositional display of pseudo-intellectualism. In a rather ingenious move, Wein puts everything on the table from the very beginning, hiding Verity's intellect and brass in plain sight while she directs attention toward other elements of the narrative. The end result is subtle, but indisputably brilliant.

Historically speaking... well, I'm not sure I want to go into too much detail on that account. Suffice it to say Wein doesn't hold back. I'm not sure that the description of torture, execution, and death are appropriate for every reader, but I personally thought the author's decision not to hold back intensely admirable considering the subject matter. History loses its value when we downplay the parts we don't care to consider and I think novels like this help those lessons alive through honest and unfiltered illustration of human history.

I didn't know what to expect when I picked up Code Name Verity, but the title proved an intense and complex narrative that vividly recreates the intensity of the era. An absolute must read for one and all.