Interview with Susan Hughes, author of A Kiss From France

Author interviews are one of my favorite things to post which is why I am super excited to welcome author Susan Hughes to Flashlight Commentary to discuss her novel, A Kiss from France. 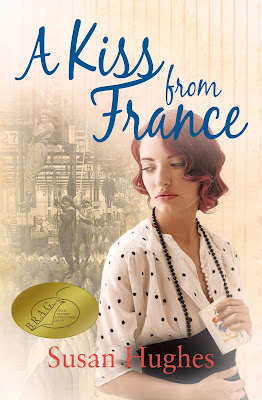 Welcome to Flashlight Commentary Susan. It’s great to have you with us. To start things off, please tell us a bit about A Kiss from France.
The story is set during the latter part of WW1, and follows the lives of two British female munitions workers whose expectations are shattered by that war. One decides to make the best of it in spite of the hardships and looks to the future; the other is haunted by past failures and struggles to break free. Each woman must contemplate making a personal sacrifice so that when peace comes, they are able to exert some control over their lives.

Where did the idea for this story come from?
After my grandmother died, I found half a dozen WW1 silk postcards in a box. They’d been sent from the western front one hundred years ago. With them was a black and white photograph of some prisoners of war. I had no luck finding out more information about the identities of the senders and recipient (although I suspect they were my great grandfather and great grandmother) but the cards continued to fascinate me. I decided to research the period and came across the female munitions workers’ stories. I knew I’d found my heroines for a story about the brave women left behind on the Home Front.

Without giving too much away, what can you tell us about Lizzie Fenwick? What kind of woman is she?
Lizzie is nineteen and single when the novel starts in 1917. She is intelligent but, in line with the times, wasn’t formally educated beyond age 14. Nevertheless, she is quietly ambitious and wants to make something of herself beyond the confines of domestic service. The outbreak of war gives her the opportunity to work in a munitions factory where the better wages and greater social freedoms fuel her dreams of betterment. Of course, this being an era when spinsterhood was considered the cardinal sin and the death and casualty rate from the war was reducing the pool of possible suitors horribly, Lizzie feels the pressure to find a husband. The war complicates matters in the most grievous way, but ultimately she has to decide where her true future fulfilment lies.

What about Eunice Wilson, how is she different from Lizzie?
Eunice is married and finally a mother after four miscarriages. By WW1 standards (female life expectancy 50 years), she is middle aged at 32. The war has fractured her marriage and being a mother becomes all consuming. Unlike Lizzie she doesn’t expect the jobs women fill while the war rages to be continued once peace returns. Eunice is quite content in the domestic sphere and the social and economic freedoms Lizzie relishes are far less important to her. In the end it’s her heartfelt maternal instincts that inform her character and lead her to a decision which will come back to haunt her.

With the men off fighting the war, women had to step outside their traditional roles. Taking on these responsibilities is kind of a double edged sword isn’t it? Freedom and independence is not free of consequence and/or temptation. Do Eunice or Lizzie struggle to find balance in their new existence?
Lizzie is quite naïve and when we first meet her she is daydreaming about an idealised war-hero she is writing to, but hasn’t yet met. She is also reeling from the memory of being verbally abused at a dance by a soldier because she refused to sleep with him. She doesn’t see herself as ‘that sort of girl’. When Lizzie is caught in a horrific bombing raid it changes her outlook: if she might be dead tomorrow, she might as well live a bit first.  Soon enough she has to deal with the consequences of that decision, and she comes to realise that freedom and independence is indeed a double edged sword, particularly if your moral compass has been skewed by accepted wartime behavior.

Eunice, in charge of the household in her husband’s absence and earning good money, quite enjoys a degree of freedom and independence. But when the war brings grief, she succumbs to a temptation different from Lizzie’s. It doesn’t bring her the relief or joy she hoped for, rather it exacerbates her torment. Unlike Lizzie, balance in her new existence eludes Eunice.

As a novelist, what drew you to this particular period?
Ever since I read Wilfred Owen’s war poems at school and, later, classic WW1 fiction, I have been drawn to that cataclysmic conflict. However, it was probably finding the WW1 postcards that really ignited my imagination. There’s something about a big conflict, life and death, with all its extremes - horror and grief at one end and love and kindness at the other - that spoke to something in me. Maybe it was knowing my relatives endured it? It was also a period when women stepped out of the shadows of their traditional roles and stood up to be counted, filling the men’s shoes. It might have only been ‘for the duration’, but there would be no going back from that.

What scene posed the greatest challenge for you as an author? Why was it troublesome and how did you work through it?
I agonized over the ending. Lizzie has to make a choice. Given what she experiences, the times she lives through and the point at which I end the story, I think she makes the right decision. However, I’ve had some requests for a sequel to see how her decision pans out. Maybe I’ll do that.

Sometimes fiction takes on a life of its own and forces the author to make sacrifices for the sake of the story. Is there a character or concept you wish you could have spent more time on?
I really enjoyed imagining the character of Peggy Wood – a foundling whose confined, loveless upbringing fuels her desire to cast caution to the wind, have a good time and deny herself nothing. She is the link between Lizzie and Eunice and is the catalyst that encourages both women’s wartime behavior. Her approach to life can be encapsulated in her motto: “There’ll be plenty of time for regrets after the war – if you live that long.” Peggy is amoral – although her conscience does prick her occasionally – and I could have almost written an entire novel about her (note to self: write a book about Peggy!)

Historical novelists frequently have to adjust facts to make their stories work. Did you have to invent or change anything while writing A Kiss from France and if so, what did you alter?
My munitions factory is based on an actual place but I altered one particular historical fact about it to suit the plotline. So I don’t give anything away, I’ll only say I changed the date of an event by a few months. That’s the only historical fact I altered, all other things are in accordance with the actual WW1 timeline.

If you could sit down and talk with one of your characters, maybe meet and discuss things over drinks, who would you choose and why?
Eunice’s husband, Jack Wilson. We only see him through Eunice and Lizzie’s eyes but his actions have a key impact on their lives. However, I think I’d prefer to meet him before the war changes everything. See him when he’s in his pomp as a professional boxer, handsome and attractive, winning trophies and female hearts. I might even flirt with him a little bit…

Just because I’m curious, if you could pick a fantasy cast to play the leads in a screen adaptation of A Kiss from France, who would you hire?
Because my story is set in Britain, all but one of my leads are British. (I hope Amy Adams can master a British accent!)
Lizzie Fenwick: Amy Adams (fresh-faced beautiful redhead, has a certain naivety about her but behind the eyes there’s a determination to win!)
Eunice Wilson: Kelly Macdonald (physically, her particular features lend themselves to an old-fashioned look and would suit my period drama; but I like that there is an aura of fragility and vulnerablility about her)
Lizzie’s soldier-lover: James MacEvoy (Attractive without being classically handsome, he has the right balance of masculinity and sensitivity)
Edmund Fawcett: Richard Armitage (Tall, dark and commanding but compassionate – rather as he appeared in Mrs Gaskell’s ‘North and South’ British TV adaptation)
(Check out my Pinterest board for ‘A Kiss from France’ to see them https://uk.pinterest.com/hughes7584/a-kiss-from-france)

Finally, what's next for you? Do you have a new project in the works?
I’m sticking with the twentieth century. I’ve been immersed in the 1930s for my current project, which is almost finished: a suspense novel set in London, with a romantic element. I really love that period – the extremism in politics; the glamorous fashions; the class divisions – and I have another story set in that same era percolating in my head.

PRAISE FOR A KISS FROM FRANCE

"I was impressed by the way it deals with the trauma and desperation of those who return home from war, and the emptiness and pain of those who stayed behind and witnessed the return of men whose minds and lives were irrevocably broken. It’s about how exceptional and extreme situations, like wars, affect the lives of ordinary people in their daily lives, and influence their perception of life and love." - Luccia Gray, Goodreads Reviwer

"I really couldn't put this book down and as I reached the end I was sure how it was all going to finish. I have to say I was surprised when I'd reached the last page and the outcome was quite different. I'm not sure what the author's plans are but I would love to see a sequel." - Joanna Lambert, Goodreads Reviewer

"Beautifully written & I thoroughly enjoyed it .. the only thing I would say is it seemed to finish a bit too quickly for me, nevertheless I would happily recommend it & look forward to the authors’ next novel in the Spring. I hereby award it 4 stars." - Allison, Goodreads Reviewer I grew up north of the River Tyne but then I heard the siren call of London and left, never to live in the North East again.  As a child, I had little interest in dolls – I preferred climbing trees and catching water boatmen in a jam jar; my best ever toys were a go-kart and a scalextric. My grandmother’s home cooking fed my body but books nourished my soul.  All my meagre pocket money went on 3/6 paperbacks from T&G Allen in North Shields.

I live near the North Devon coast, where long walks and bracing
West Country air give me space and thinking time.  Around me swirl the ghosts of King Arthur at Tintagel, Lorna Doone on Exmoor and the denizens of Daphne du Maurier’s ‘Jamaica Inn’ on Bodmin Moor.

A Kiss from France is my debut novel.

Thanks so much for having me on your blog, Erin. Your insightful questions really made me think about my characters!