Lost Destiny: Joe Kennedy Jr. and the Doomed WWII Mission to Save London by Alan Axelrod 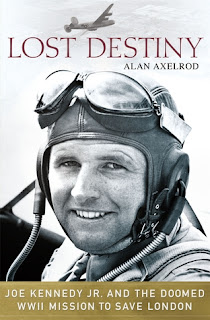 On August 12, 1944, Lieutenant Joseph P. Kennedy, Jr., heir to one of America's most glamorous fortunes, son of the disgraced former ambassador to Great Britain, and big brother to freshly minted PT-109 hero JFK, hoisted himself up into a highly modified B-24 Liberator bomber. The munitions he was carrying that day were fifty percent more powerful than TNT. Kennedy's mission was part of Operation Aphrodite/Project Anvil, a desperate American effort to rescue London from a rain of German V-1 and V-2 missiles. The decision to use these bold but crude precursors to modern-day drones against German V-weapon launch sites came from Air Corps high command. Lieutenant General Jimmy Doolittle, daring leader of the spectacular 1942 Tokyo Raid, and others concocted a plan to install radio control equipment in "war-weary" bombers, pack them with a dozen tons of high explosives, and fly them by remote control directly into the concrete German launch sites—targets too hard to be destroyed by conventional bombs. The catch was that live pilots were needed to get these flying bombs off the ground and headed toward their targets. Joe Jr. was the first naval aviator to fly such a mission. And—in the biggest manmade explosion before Hiroshima—it killed him. Alan Axelrod's Lost Destiny is a rare exploration of the origin of today's controversial military drones as well as a searing and unforgettable story of heroism, WWII, and the Kennedy dynasty that might have been.

I'm not gonna beat around the bush here and I'm not going to apologize for my bluntness either. I was hugely disappointed with Alan Axelrod's Lost Destiny: Joe Kennedy Jr. and the Doomed WWII Mission to Save London and feel the eleven and half hours I spent listening to the audio largely wasted.

Axelrod did a marvelous job chronicling Operations Anvil and Aphrodite, but his coverage of the famous face that graces the jacket is nothing short of laughable. The mission, it's purpose and development are illustrated in minute detail, but the man himself features in less than 30% of the text. Looking back, I wish the author had written solely about the operations and listed Kennedy as little more than a tragic pilot, but it's also occurred to me that Joe Jr. was tacked on to this manuscript to capitalize on name recognition and artificially inflate sale numbers.

I'll grant the book has merit for those interested in exhaustive detail regarding WWII aviation, developing technologies, weaponry, and bomb testing, but those looking for information on Kennedy's war experience best look elsewhere.

But there was no way to know all this as the V-1s rained down and as London, among other cities, waited in dread for assault by the even deadlier V-2s. So the Allied bombers flew, and so Joseph P. Kennedy Jr. and the other men of Aphrodite and Anvil prepared to lay down theirs lives to save the citizens of London and the other English towns.