The Other Daughter by Lauren Willig 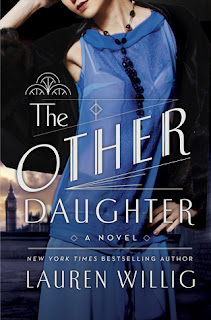 Raised in a poor yet genteel household, Rachel Woodley is working in France as a governess when she receives news that her mother has died, suddenly. Grief-stricken, she returns to the small town in England where she was raised to clear out the cottage...and finds a cutting from a London society magazine, with a photograph of her supposedly deceased father dated all of three month before. He's an earl, respected and influential, and he is standing with another daughter-his legitimate daughter. Which makes Rachel...not legitimate. Everything she thought she knew about herself and her past-even her very name-is a lie. Still reeling from the death of her mother, and furious at this betrayal, Rachel sets herself up in London under a new identity. There she insinuates herself into the party-going crowd of Bright Young Things, with a steely determination to unveil her father's perfidy and bring his-and her half-sister's-charmed world crashing down. Very soon, however, Rachel faces two unexpected snags: she finds she genuinely likes her half-sister, Olivia, whose situation isn't as simple it appears; and she might just be falling for her sister's fiancé...

I've eyed Lauren Willig's novels for a long time, but The Other Daughter marks my first real experience with her work. I read The Record Set Right, the short Willig contributed to Fall of Poppies, but there's a world of difference between an anthology submission and a full length narrative. It's apples to oranges really, but that's neither here nor there.

I listened to the audio edition of The Other Daughter and I think it safe to say the format colored my experience. Nicola Barber's voice isn't poor, but I wasn't thrilled with her performance. The inflections she employed for each individual character drove me up the wall. The male cast members suffered more than their female counterparts, but I felt led and I didn't like how Barber's interpretations pigeonholed each of Willig's characters.

The plot itself also challenged me. I prefer meatier stories and the trials faced by Miss Rachael Woodley lacked the sort of intrigue that captures my imagination. Don't misunderstand, it's a fun narrative, overflowing with lighthearted humor and smart literary references, but Willig's London is dressed to the nines, encrusted in jewels, and positively drowning in champagne. The mysteries at the heart of the novel felt petty and the motivations behind them vague and coincidental. The reveal lacked the punch I craved and I ultimately felt rather indifferent over the lack of deliberate antagonism in the story.

Perhaps I picked the wrong novel or selected the wrong format, but The Other Daughter didn't work as well as I hoped and while I'm happy to have sampled it, I am not chomping at the bit to get into the Pink Carnation series.

"No sin is original, no matter what the bright young things may hope. We're all merely playing to a theme."