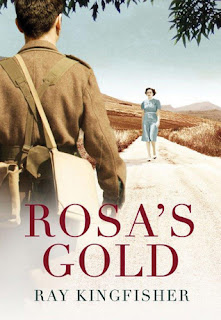 Nicole Sutton’s world has been turned upside down. Sixteen and suffering the fallout of a devastating family tragedy, she is forced to move away from her London home to the quiet town of Henley—and a new life she never wanted nor expected. In the dusty cellar of her strange new house, Nicole stumbles upon a worn old journal left behind by a previous occupant. Inside, through the eyes of a soldier named Mac, she finds herself drawn into a brutally honest memoir of the horrors of war and Auschwitz—and of the life and love Mac had to leave behind. The more Nicole reads, the more she is able to make sense of her own troubles. Because Mac’s story is so much more than a journal: it is the story of a family fighting for survival in the darkest days of humanity, of hope in the face of persecution. And then there’s the buried gold...

I was optimistic going into Ray Kingfisher’s Rosa’s Gold, but the reality didn’t live up to my expectations. I don’t mean to imply that my opinion trumps anyone else’s because it doesn’t, but I’m not gonna lie, I expected more from a book with one hundred four and five star ratings. A lot more.

The lack of character development grated my nerves and I was bitterly disappointed with the passionless relationship between Mac and Rosa. I’m sorry, but a couple of chaste kisses does not an epic romance make. Structurally speaking, the novel was all over the place and the plot really doesn’t get around to the gold until the final fourth of the narrative. That’s right folks, the novel’s primary plot point is tagged on like an afterthought in the final chapters. Why? I don’t know, the decision made as much sense as introducing a third narrator, one Mrs. Belotti, in the thirty-seventh of thirty-nine chapters, but that’s just my opinion.

I’m not gonna get on my soapbox about Nicole’s annoyingly infantile parents, but I will stay that I didn’t care for the contemporary story line. Nicole’s experience hardly qualifies as a compelling arc and I don’t consider her an active participant in the narrative. I suppose one could argue, that much like Bastian in The Neverending Story, but while Nicole bears witness, she doesn’t stand up to anything in the end, she merely stands up and I don’t think that’s quite the same thing.

My last issue, or at least the last I feel the need to mention, is continuity. In the jacket description and on pages eight, twenty-eight, and thirty, Nicole is sixteen years of age. On page sixteen, one hundred nine, two seventy-one, two seventy-two, and two seventy-eight, she is seventeen. I’ll grant it’s a minor detail, but I noticed it just the same and I can’t help wondering how many other continuity issues I’d have found I’d been actively hunting them. I mean no offense, but how is the reader supposed to keep the details straight if the narrative contracts itself? And yes, I checked my ARC edition from Lake Union against the one currently available through Amazon Digital Services, and the same errors exist in both. My ARC also lacks the usual disclaimer for unedited manuscripts which leads me to believe the book is ready for release and any comment on the editing failures is fair game.

At the end of the day, Rosa’s Gold simply didn’t suit my tastes. I’m happy to have tried it, but I don’t see myself recommending it to other readers down the road.

I wonder whether they took that idea and twisted it into ‘Arbeit Macht Frei’ – the words erected across those dark, threatening gates like a mantra to the suffering masses. Was it a mantra? Was it prayer? Or was it there merely to taunt those people that little bit more? Either way, ‘twisted’ is the correct word; everything in that horrid place in those horrid times was twisted in one way or another.