The Alchemist's Daughter by Mary Lawrence 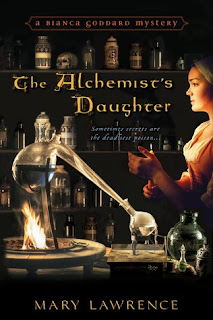 In the year 1543 of King Henry VIII’s turbulent reign, the daughter of a notorious alchemist finds herself suspected of cold-blooded murder... Bianca Goddard employs her knowledge of herbs and medicinal plants to concoct remedies for the disease-riddled poor in London’s squalid Southwark slum. But when her friend Jolyn comes to her complaining of severe stomach pains, Bianca’s prescription seems to kill her on the spot. Recovering from her shock, Bianca suspects Jolyn may have been poisoned before coming to her—but the local constable is not so easily convinced. To clear her name and keep her neck free of the gallows, Bianca must apply her knowledge of the healing arts to deduce exactly how her friend was murdered and by whom—before she herself falls victim to a similar fate...

Mary Lawrence’s The Alchemist’s Daughter has been on my TBR longer than I care to admit. I received an ARC in 2015, but only got round to picking it up this summer. The premise intrigued me, but for one reason or another the book never demanded my immediate attention.

Interestingly, my sentiments have not been altered by actually reading the novel. I mean no offense, but the telling struck me as rather bland. The mystery unfolded in a loosely related series of events, but it lacked the tension and urgency I crave. I pieced it all together early on and spent most of the book waiting for the characters to catch up and the author to deliver her point. Unfortunately, the climax fell flat and I was left wondering why I’d bothered sticking it out.

Character development was thin beginning to end, but I was intensely frustrated with Bianca. The attitudes of Lawrence’s heroine struck me as anachronistic and I was frustrated by the depth of her scientific understanding which seemed to exceed the capacities of the day. I was also annoyed with how irrelevant the story felt when all the details came to light. I don’t want to give anything away, but Bianca Goddard and Jolyn Carmichael seemed removed from much of the drama and I couldn’t help feeling they were minor characters in the affair.

Looking back, the only aspect I truly appreciated was Lawrence’s descriptions of life in under Henry VIII’s rule. This is not Gregory’s glittering court or Mantel’s political pit of vipers. Bianca and her fellows live in London’s rat infested streets and though I know the graphic descriptions wont appeal to everyone, I personally applauded the author for daring to incorporate such vulgar realities into her narrative.

There are now three Bianca Goddard Mysteries and while I liked The Alchemist's Daughter well enough, I do not think I’ll be continuing the series. I’ll certainly recommend it to fans of Tudor era fiction, but personally I need a little more meat in my mysteries and don’t think I’ll find it here.

Times like this required resourcefulness and calm. Unfortunately, both had escaped her. The thought of rats chewing her apart renewed her calls for help, and she banged and kicked the door until her thin leather boot wore through and her toes ached. She considered setting the door on fire, but what if it asphyxiated her before it burnt down? Well, at least she’d be dead when the rats gnawed her bones.