The Unquiet Bones by Mel Starr 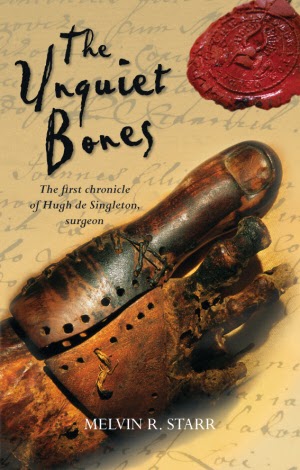 Hugh of Singleton, fourth son of a minor knight, has been educated as a clerk, usually a prelude to taking holy orders. However, he feels no real calling—despite his lively faith—and he turns to the profession of surgeon, training in Paris, and then hanging his sign in Oxford. Soon after, a local lord asks Hugh de Singleton to track the killer of a young woman whose bones have been found in the castle cesspool. Through his medical knowledge, Singleton identifies her as the impetuous missing daughter of a local blacksmith. The young man she loved—whom she had provoked very publicly—is quickly arrested and sentenced at Oxford. But this is just the beginning of the tale. The story of Singleton's adventure unfolds with realistic medical procedures, droll medieval wit, romantic distractions, and a consistent underlying sense of Christian compassion.

Mel Starr's The Unquiet Bones landed in my inbox as most tour books do. I'd not heard of the author and the series was entirely unknown to me, but I like medieval fiction and felt the premise promising enough to take the plunge.

Now I'll be honest, it took me a while to get into this one. Starr's style isn't typical and I was several chapters in before I really got a handle on it, but it was smooth sailing from there on. Hugh de Singleton is an easy protagonist to understand and I liked that he isn't pompous or arrogant. In point of fact, his struggle to gain confidence in himself makes him rather empathetic and relatable.

The mystery itself could have been more complex, but I wasn't dissatisfied with how things played out. I liked the atmospheric quality of Bampton and I felt Starr's treatment of religion quiet interesting. That said, the surgical descriptions were by far my favorite element of the book and I think Starr's attention to detail in regard to the practice of medieval medicine brought something very special to the narrative.

Enjoyable and entertaining, The Unquiet Bones is an engaging tale of a compassionate man in uncertain times. Recommend to fans of Ellis Peters, Umberto Eco and Ariana Franklin.

The youth spoke of his reasons for desiring Margaret for a wife, among which were her health, her likely fecundity, her reputation for hard work won at her father’s forge, and even her appearance. He did not mention love, but such emotion is trivial compared to the important issues of survival, work, and heirs.