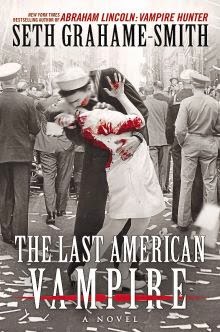 In Reconstruction-era America, vampire Henry Sturges is searching for renewed purpose in the wake of his friend Abraham Lincoln's shocking death. It will be an expansive journey that will first send him to England for an unexpected encounter with Jack the Ripper, then to New York City for the birth of a new American century, the dawn of the electric era of Tesla and Edison, and the blazing disaster of the 1937 Hindenburg crash. Along the way, Henry goes on the road in a Kerouac-influenced trip as Seth Grahame-Smith ingeniously weaves vampire history through Russia's October Revolution, the First and Second World Wars, and the JFK assassination. Expansive in scope and serious in execution, The Last American Vampire is sure to appeal to the passionate readers who made Abraham Lincoln: Vampire Hunter a runaway success.

Every reader I know has a guilty pleasure and I am no exception. Some like steamy romances, others favor straight-up erotica, but I myself gravitate to steampunk and paranormal fiction which is how I discovered Seth Grahame-Smith back in 2010. I'd just reread Pride and Prejudice and feeling game for a laugh, I decided to follow it up with Pride and Prejudice and Zombies.

Honestly I found the book amusing, but I wasn't overly impressed with the title, so I very nearly passed when a local bookseller recommended Abraham Lincoln: Vampire Hunter. Please excuse the pun, but I like books I can sink my teeth into and while my first experience with Grahame-Smith had been entertaining, I'd found Pride and Prejudice and Zombies fluffy and I didn't consider a second go round particularly promising. Fortunately for all, I ignored my initial impulse and threw the recommendation on top of my other purchases.

For the record, Abraham Lincoln: Vampire Hunter is a much better book than it is a movie. It is playful and dark, but it is also remarkably clever. Grahame-Smith wove several elements of Lincoln's life into the fabric of his fiction and placed some very imaginative twists on Civil War battles like Bull Run and Antietam. The author's inclusion of headliners such as Edgar Allan Poe, William H. Seward, Stephen A. Douglas, George B. McClellan, and John Wilkes Booth further emphasized his appreciation for the history on which the story was based and brought a unique dynamic to a genre typically void of authentic detail. In short, I loved it.

So what are my thoughts? Did The Last American Vampire live up to its predecessor or did it fall short like Grahame-Smith's adaptation of Austen's classic? Honestly, I think it somewhere in between. The historic scope of the novel appealed to my interests and I get a kick out of Grahame-Smith's sense of humor, but feel the execution lacked necessary cohesion and question the significance of much of the material in relation to Henry's pursuit of Grander. It's a fun piece, but much like Norrington's The League of Extraordinary Gentlemen, the final product fails to meet its full potential.

Just as the towering myth of Abraham Lincoln—honest backwoods lawyer, spinner of yarns, righter of wrongs—tells only part of the truth, so, too, is the myth of America woefully incomplete. The country that Ronald Reagan once called “a shining city upon a hill” has, in fact, been tangled up in darkness since before she was born. Millions of souls have graced the American stage over the centuries, played parts both great and small, and made their final exits. But of all the souls who witnessed America’s birth and growth, who fought in her finest hours, and who had a hand in her hidden history, only one soul remains to tell the whole truth.