A Dangerous Madness by Michelle Diener 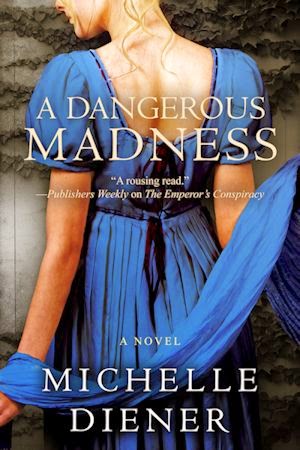 The Duke of Wittaker has been living a lie... He’s been spying on the dissolute, discontented noblemen of the ton, pretending to share their views. Now he’s ready to step out of the shadows and start living a real life...but when the prime minister of England is assassinated, he's asked to go back to being the rake-hell duke everyone believes he still is to find out more. Miss Phoebe Hillier has been living a lie, too... All her life she's played by society's rules, hiding her fierce intelligence and love of life behind a docile and decorous mask. All it's gotten her is jilted by her betrothed, a man she thought a fool, though a harmless one. But when she discovers her former fiancé was involved in the plot against the prime minister, and that he's been murdered, she realizes he wasn't so harmless after all. And now the killers have set their sights on her... The only man who can help her is the Duke of Wittaker--a man she knows she shouldn't trust. And she soon realizes he's hiding behind a mask as careful as her own. As the clock ticks down to the assassin's trial, the pair scramble to uncover the real conspiracy behind the prime minister's death. And as the pressure and the danger mounts, Phoebe and Wittaker shed their disguises, layer by layer, to discover something more precious than either imagined–something that could last forever. Unless the conspirators desperate to hide their tracks get to them first.

Michelle Diener is a jack-of-all-trades, a gifted writer who can move between genres with ease and find success among multiple demographics. The historic mystery in The Emperor's Conspiracy proved her a master of intrigue while fantasy adaptations like Mistress of the Wind and The Golden Apple highlighted her creativity and original narrative style. She wields a wickedly witty pen and though her work leans toward lighter fiction, I've always found it delightfully entertaining and A Dangerous Madness was no exception.

Like the earlier installments of Diener's Regency London series, the story builds on an actual event. I was not familiar with the assassination of Prime Minister Spencer Perceval prior to picked up this book, but found my naiveté enhanced my experience with the novel as it prompted me to look deeper into the material. Phoebe and Wittaker are wonderful characters and I enjoyed the chemistry they shared, but the facts of their story were easily my favorite aspect of the narrative.

The books are written as stand-alones and can be read in any order, but that said, I like the subtle nod Diener offered those already acquainted with Giselle Barrington, Lord Aldridge, Charlotte Raven and Lord Durnham. I don't think the mysteries themselves particularly perplexing, but they've momentum and character, a playfulness that is as evident in their construction as it is their heroines and heroes. Some elements feel a tad far-fetched for the period, but Diener makes up for it with plenty of lighthearted mischief and lively banter.

Chock full of secrets, romance, and suspense, A Dangerous Madness proved an absolute pleasure. A fun and engaging tale from beginning to end.

She ached to break the rules, to heave off the yoke of polite manners that kept her small and cowed and unable to follow her inclinations. But the cruel joke was she did not want to be alone, either. Did not want to be a social pariah.