The Kennedy Wives: Triumph and Tragedy in America's Most Public Family by Amber Hunt & David Batcher 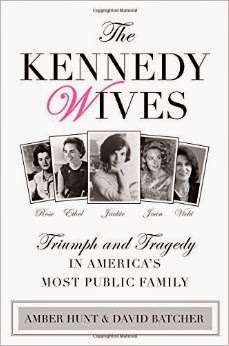 The Kennedy wives saw history up close—made history in some cases. They knew wealth and privilege but we are bonded to them by loss which are our losses too. The Kennedy women—fierce, intelligent, and very private—belong to us. Not because of their glamour, but because of their grief and misfortunes. The Kennedy Wives takes an unflinching look at the women who married into the Kennedy family and their distinct roles. Rose, the matriarch; Ethel, the athlete; Jackie, the icon; Joan, the fragile beauty; and Vicki, the redeemer. In reality, each woman was complex and multifaceted. As Kennedy wives, they were bonded through characteristics and experiences unique to the Camelot family. The Kennedy Wives is an exploration of these women that will offer what no other book or film created thus far has: a thoughtful analysis of what drew the Kennedy men to these iconic women, and what the women endured in exchange for their acceptance into the Camelot clan.

I have mixed feelings about Amber Hunt and David Batcher's The Kennedy Wives. A collected biography of one of America's most recognizable families, the book boasts obvious appeal and covers a lot of wonderful material, but the execution wasn't as even-handed as I envisioned going in and I must admit there were aspects of the book that left me wanting.

I appreciated the format in that each of the women had a section dedicated specifically to her, but I'm not sure I liked how the authors labeled Rose, Ethel, Jackie, Joan and Vicki. I feel the treatment pigeonholed their personalities into very specific roles, narrowed the authors' views during the writing process and resulted in a very simplistic portrait of each Kennedy spouse. As the jacket states, this is a complex and multifaceted group of women, individuals who are far too dynamic to stereotyped and I'm not convinced the presentation here does justice to that legacy.

The underlying favoritism of Jackie and the Camelot era also frustrated me as the figurative designation refers to the Kennedy administration rather than the extensive dynasty founded by Joseph Patrick Kennedy. Jackie's section is more rounded than those of the other spouses, her picture is more prominently displayed on the cover and, paired with the Camelot references in the description, I felt she was singled out. Were this the biography of an individual, I wouldn't take issue, but all of these women married Kennedy men and weathered the challenges of that association and at the end of the day, I don't think Hunt and Batcher's work displays Rose, Ethel, Jackie, Joan and Vicki on an even playing field.

Finally, I had particular difficulty the chapters dedicated to Ethel. To be fair, this section sparked an interest that inspired me to learn more about Robert's widow, but it also highlighted a flaw that left me rather disappointed with the book. I liked what I read so much that I took time off to watch Rory Kennedy's Ethel, but in listening to the documentary, I realized how heavily Hunt and Batcher relied on the film and was ultimately disillusioned with their research. The story is there, but I don't feel the authors brought anything new to the table and that opinion openly colored my experience with subsequent sections of The Kennedy Wives.

Is it a bad biography? Certainly not. The intent here is nothing short of brilliant and generally speaking, I think the volume a great introduction to Rose, Ethel, Jackie, Joan and Vicki. Yes, I felt there was room to do more with the material and I'm not shy about saying so, but when all is said and done, I value the time I spent with this book and would definitely recommend it to anyone interested in the Kennedy women.

These five women—The Kennedy Wives—lived twentieth-century US history. Their experiences of wealth and power, love, loss, and tragedy occurred at such a heightened level that it’s tempting to see them as mythic, almost archetypal creatures. But Rose, Ethel, Jackie, Joan, and Vicki were and are stubbornly fleshy in their humanity, and they give all of us, men and women, powerful examples of what everyday strength, resilience, and grace can look like. It’s because of their refusal to ossify into sterile sainthood that they will always fascinate—and always inspire.

I have this in my queue from Netgalley. Love the honest review. I appreciate your take on how each woman is portrayed.

Thank you! It's definitely worth reading. :)