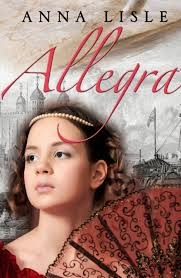 1822: Byron's young illegitimate daughter dies in an Italian convent, sent away from the mother who adored her. 1838: young Alice Clarke, unhappily married to a brutal man, is pursued on London's streets by a mysterious Greek man and a cloaked woman. Alice is in love with a man she can never have: a sea captain sailing the perilous route to India around Africa. When her lover vanishes on a voyage, Alice's pursuers draw her into an increasingly tense game of cat and mouse running between the early Victorian squalor of London's Rookeries and the splendour of its Mayfair squares. A murder in Regent's Park only reinforces the message that Alice is involved in a very dangerous game, but how is she linked to a notorious group of English poets living in Italy sixteen years earlier?

Anna Lisle's Allegra is one of those titles that didn't work for me. I picked it up on a whim, but quickly found myself frustrated by a premise that was too far-fetched and a delivery that didn't compensate for the liberties taken in its execution. To add insult to injury, I feel the cover art misrepresents the title and while I do not factor the jacket as part of my rating, I can't deny irritation with the design.

The relative age of the model on front of the book led me to believe this was a young adult piece, but judging on content, I can honestly say Lisle wrote Allegra with a more mature audience in mind. I was naturally surprised, but shrugged it off as a mere misstep in the publishing process, a hiccup and nothing more. Other issues, however, were harder to ignore.

Cookie-cutter characters with no depth and little spirit, I found it difficult rouse my enthusiasm for Alice and her peers. The language is at times poetic, Lisle can turn a pretty phrase, but the narrative lacked allure, something I feel necessary especially in stories that revise history in the name of entertainment. It moves along at a brisk pace, but it is mechanical and progresses systematically from one twist to the next, often leaving me at a loss as I struggled to work through Lisle's work.

I wish I could recommend Allegra, but it simply wasn't my cup of tea. An aspiration with potential that never materialized, the title failed to captivate or delight.

At this moment I truly cast off Alice and became Allegra. Now, at last, Alice and her sprig muslins and coy bonnets became Allegra with the silks and velvets. Alice nibbled on sweetbreads; Allegra swallowed oysters whole.