The Ripper's Wife by Brandy Purdy 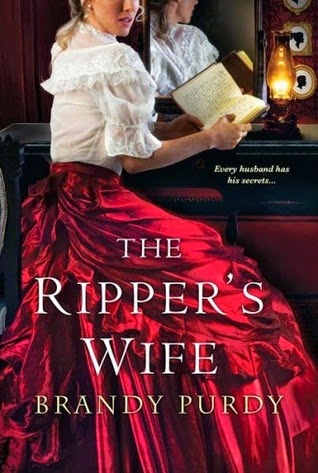 It begins as a fairytale romance-a shipboard meeting in 1880 between vivacious Southern belle Florence Chandler and handsome English cotton broker James Maybrick. Courtship and a lavish wedding soon follow, and the couple settles into an affluent Liverpool suburb. From the first, their marriage is doomed by lies. Florie, hardly the heiress her scheming mother portrayed, is treated as an outsider by fashionable English society. James's secrets are infinitely darker-he has a mistress, an arsenic addiction, and a vicious temper. But Florie has no inkling of her husband's depravity until she discovers his diary-and in it, a litany of bloody deeds...

I'd love to say Brandy Purdy's unique style and sense of humor led me to this piece. I'd love to have some brilliant intellectual anecdote about James Maybrick or Florence Chandler. I'd credit my morbid fascination in Jack the Ripper if I could, but I'd be lying through my teeth and probably choke on the deceit because in truth, the credit goes to whoever put the final stamp of approval on this jacket. Two words folks: cover slut. One day I'll kick the habit, but not this day and in all honesty, tomorrow doesn't look good either.

Like The Queen's Rivals and The Boleyn Bride, The Ripper's Wife is chock fully of singular characters, but unlike her earlier novels, this one surprised me. I enjoy Purdy's work well-enough, but I've always found it a tad fluffy and while there is plenty of superfluous detail in her latest release, I was shocked at where she took Florie's story. There are some genuinely dark and disturbing scenes in this piece and though I'm not an advocate of gratuitous violence, I think this particular narrative needed to go someplace foul and admire Purdy's treatment of the material.

That said, I wasn't as exactly enchanted with Purdy's heroine. Florie begs for sympathy and shirks responsibility at every opportunity. She's incredibly naive and doesn't have an ounce of personal ambition. I found her unwavering affection for Jim disgusting on a number of levels and I was thrown by her relatively modern views on her husband's dependencies. Ultimately, her perceptions undermined the authenticity of her character and there just wasn't enough substance in her being to capture my imagination and/or interest.

Finally, and I know I'm nitpicking here, I didn't like the structure of this piece. The story seemed to lose its way once Florie loses the children. Everything after that felt awkward and forced and though I liked Purdy's nod to the historic record, I think there is something to be said for knowing when a story has reached its end.

Why did I not remember, when I looked so deep into his eyes, that blue can be such a cold color? Why did I not notice that while I was saying so much, he was saying so little? I was a fool; I saw only the charmer and missed the snake entirely.

"cover slut". I love it! I'm glad I'm not the only one who often picks up a book simply because of the cover. I might have to look into this one!