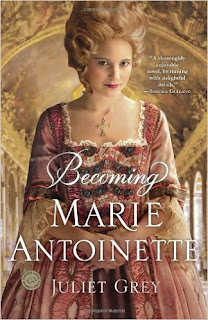 Raised alongside her numerous brothers and sisters by the formidable empress of Austria, ten-year-old Maria Antonia knew that her idyllic existence would one day be sacrificed to her mother’s political ambitions. What she never anticipated was that the day in question would come so soon. Before she can journey from sunlit picnics with her sisters in Vienna to the glitter, glamour, and gossip of Versailles, Antonia must change everything about herself in order to be accepted as dauphine of France and the wife of the awkward teenage boy who will one day be Louis XVI. Yet nothing can prepare her for the ingenuity and influence it will take to become queen. Filled with smart history, treacherous rivalries, lavish clothes, and sparkling jewels, Becoming Marie Antoinette will utterly captivate fiction and history lovers alike.

Marie Antoinette is a hard personality for me to like. In most of the literature I’ve come across, she is depicted as something of a twit. Becoming Marie Antoinette is no exception; in point of fact, this particular incarnation describes herself as “no more talented than a parrot or a trained monkey.” As a reader I find it incredibly frustrating to follow a character as dense and frivolous as Grey's Maria Antonia. Still,  I remain hopeful that an author will one day take up the challenge and gift this unfortunate Hapsburg a degree of substance.

The author may not have presented a new version of the Archduchess but she does offer a fresh look at a period which is often overlooked, her childhood. Everything from the need for braces to the troublesome issue presented by the size of the Maria’s forehead is integrated into the narrative. While it makes for somewhat tedious reading, Grey's efforts are admirable.

Maria Antonia bored me but the I found the depiction of her mother, the Empress Maria Theresa quite fascinating. The Hapsburg matriarch gave birth to sixteen children over a period of twenty years. Do the math. Almost as soon as she was done having babies she was beset with the task of marrying them off. Thank heaven she was a royal and didn't have to worry about the details of actually raising her brood. Grey's Empress isn't particularly maternal but can you really blame the woman? Having so many pregnancies must have been exhausting and it certainly explains her exasperation over Maria's inability to conceive an heir in the early years of her marriage.

Becoming Marie Antoinette is good starting point for freshman scholars but I think more savvy readers will be disappointed. The story itself has much in common with Titanic; even the novice historian knows the ending. The trick is in bringing something new to the table, a  twist that captures the imagination. Whether Grey’s telling will do so has yet to be seen.

Think of the family motto: Others wage wars to succeed, but you, fortunate Hapsburg, marry! Sometimes I think Maman had so many daughters because she has so many enemies!

I really liked this one, mainly for the fact that Grey chose a different angle from which to look at Antoinette's life. Having visited Versailles, I enjoyed some of the details of what life might have been like there. I think it would have stunk!

I'm looking forward to the rest of the series. It will be interesting to see if Grey's telling changes or improves.

I liked the details a lot but I was really turned off by Maria's lack of character. Don't think that is entirely fair though, since she isn't someone out of Grey's imagination.