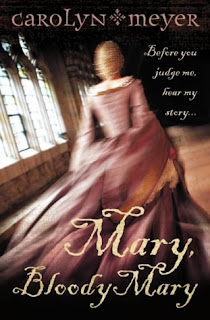 The story of Mary Tudor's childhood is a classic fairy tale: A princess who is to inherit the throne of England is separated from her mother; abused by an evil stepmother who has enchanted her father; stripped of her title; and forced to care for her baby stepsister, who inherits Mary's rights to the throne. Believe it or not, it's all true. Told in the voice of the young Mary, this novel explores the history and intrigue of the dramatic rule of Henry VIII, his outrageous affair with and marriage to the bewitching Anne Boleyn, and the consequences of that relationship for his firstborn daughter. Carolyn Meyer has written a compassionate historical novel about love and loss, jealousy and fear - and a girl's struggle with forces far beyond her control.

I wage a personal war against the stereotypes that plague stepfamilies. I grew up in one, was, for a time, a stepmother in my own right. Wicked is not a universal descriptor in the realm of stepparents, but as mine has refused to speak to me for more than three years now, I understand it is sometimes an all too accurate descriptor. One such example is the case of Mary Tudor and her stepmonster, Anne Boleyn.

Mary was born the beloved daughter of Henry VIII and his first wife, Queen Catherine. Their only surviving child, she wanted for nothing. She lived a blissful existence, the cherished heir to the throne, until the arrival of Anne Boleyn. Mary's father was not known for his fidelity but Anne was unlike any of Henry's previous mistresses. Ambitious and cunning, Anne's seduction of England's king set in motion a chain of events that would alter the course of the entire nation. Henry's daughter

As Anne's star rose, Mary's fell. She lost her mother, her father, her title, her inheritance and eventually, even her legitimacy was thrown to the wind. She was forced into the service of her infant sister, Anne’s daughter Elizabeth, and came under fire for her Catholic faith. Had Mary been a few years older she may have been spared this fate, protected by an alliance to foreign kingdom. A few years younger and she may have been restored to favor before she was considered a spinster. Fate, unfortunately, is a fickle mistress.

My only criticism of Meyer's work is that it focuses less on Mary than it does the impact Anne  had on her life. While an important aspect, I was disappointed to never get a sense of who Mary actually was

Mary, Bloody Mary is a solid if somewhat concise introduction to the early life of Henry's oldest daughter, picking up shortly before Anne's arrival and concluding just after her execution. While not the whole story, I admire Meyer's decision to omit the more graphic events of Mary's tenure as Queen from the narrative in consideration of the target audience. That being said I am firmly against the censure of history and greatly appreciated the appearance of these details in the historic notes.

I came very near to confessing to Susan that at times I, too, hated my father. It would have been so much easier if I hated him in the same way I had come to hate Anne Boleyn - pure, simple hatred. But I did not. I could not. I had not given up hope, even yet, that someday he would once again regard me as his perfect princess, his precious pearl.