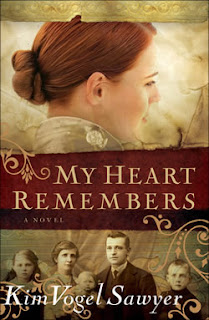 United by blood, divided by time, will three orphan train siblings ever find one another again? Orphaned in a tenement fire, three Irish-immigrant children are sent to Missouri to be adopted. Despite eight-year-old Maelle's desperate attempts to keep her siblings together, each child is taken by a different family. Yet Maelle vows that she will never stop searching for her brother and sister... and that they will be together one day in the future. Seventeen years later, Maelle is still searching. But the years have washed away her hope... and her memories. What are Mattie and Molly doing now? Where has life taken them? Will she ever see her brother and sister again?


Sawyer covers a lot of ground in My Heart Remembers. Immigration, Ellis Island, crowded tenements, sweat shops, foundling asylums, orphan trains, early photography and religion. Against this backdrop she relates the story of three siblings, separated by tragedy and united ­by a common cause.


The Gallagher kids survive terrible misfortune only to be divided by circumstance. Left in an orphan asylum, the siblings are selected for relocation, unwittingly becoming 3 of the estimated 200,000 homeless youngsters who travelled west in search of families. Children were often separated from their siblings during the process and since there were no regulations, interested parties were allowed to take children in as anything from indentured servants to family members. Sawyer’s use of premise was reasonably moving.


The truly impressive aspect of the novel was Sawyer's incorporation of child labor. Young children were an integral part of the industrial revolution and an immensely popular source of cheap labor. Petey is a member of the supporting cast and the most captivating character in the entire book. His plight tugs at the heartstrings from the abuse he suffers as a shop boy to the horrific accident that leaves him crippled with an uncertain future.

Unfortunately, integration of historic fact doesn’t make a book. The characters are flat out boring. One dimensional characters make great villains but poor protagonists. The Gallaghers needed to experience internal conflict and growth. As it is we see them primarily as shallow beings wallowing in their own self-pity. Matthew eventually stands up for himself but as we were denied the narrative of his adolescence, the moment doesn’t pack much punch. Similar issues plague Sawyer in her characterization of Maelle and Molly.

Having been driven from the church by intolerance, I have no appreciation for statements such as “Given Isabelle’s cold treatment, she wouldn’t have taken the other woman as a Christian.” Being a Christian doesn’t make you a good person any more than standing in a garage makes you a car. Self-reverence and exaltation violate the base teachings of the Bible and frankly make me sick. Bad form.

A bland story with an all too convenient conclusion. Touching but too fluffy for my tastes.

Had she ever considered how fortunate-how spoiled-she was while growing up? These children made her view the world in a different way, and she wasn't sure she liked it.