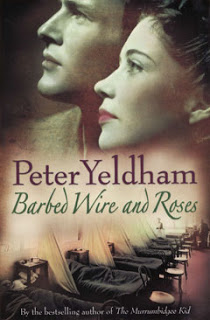 It was exciting to be on our way at last...but we were such innocents. We had no idea of the hell that lay ahead. Even if we had known, what could we have done about it?
They were our golden youth, seeking adventure on foreign battlefields. The First World War in 1914, that everyone said would be over by Christmas, and Stephen Conway rushes to enlist in the belief he should fight for King and Empire. Leaving behind a new wife and a baby on the way, he soon finds himself in the trenches of Gallipoli. Four horrific years later, Stephen is the only survivor of his platoon, shellshocked and disillusioned, and during the heat of battle on the bloodstained fields of France, he mysteriously disappears.
Stephen's ultimate fate is still a mystery when more than eighty years later his grandson Patrick finds a diary that leads him to Britain and France on a journey during which he unexpectedly finds love, and the truth about his grandfathers's fate that is even stranger and more shocking that he imagined.

I’m not kidding; I have started this review at least a dozen times. I just don’t know where to begin. Barbed Wire and Roses is such a unique reading experience that I don’t think I am capable of composing anything that would do it justice.


The book is really two story lines. Stephen Conway is a young man who, like so many in times of war, is swept up by romantic notions of victory and heroism on the battlefield. He volunteers for the army in the early weeks of WWI, leaving behind a new wife and the child she unknowingly carries. As the weeks turn into months and the months into years, Stephen loses his naivety, his friends and eventually his mind under constant bombardment of the enemy.

Two generations later, Stephen’s grandson is plagued with questions regarding the war diary of a man he never knew. Seeking answers, Patrick and his sister scour the internet but can’t find a single scrap of evidence to prove Stephen Conway died in 1918 as family legend suggests. Bedeviled by the unknown, Patrick begins a journey that will lead him half way around the world in search of answers.

Stephen’s is one of the most intriguing war stories I have ever read. He is without doubt a hero but he is by no means the stereotypical personification one usually encounters. I would try to explain but I think Patrick Conway says it best, “[Stephen] is scared shitless most of the time.” Stephen’s struggle with PTSD struck a chord with me. A former military wife, I remember the pre-homecoming meetings where spouses were coached on recognizing the symptoms. A few weeks after my ex-husband’s return a marine on the same base blew his brains out after taking the life of his spouse. Living in a time and place where the disorder is considered very real I found it hard to comprehend Stephen’s situation. These men were mentally disturbed by their experiences yet many were given white feathers and still more were diagnosed fit to return to battle. It is an alarming concept flawlessly recreated under Yeldham’s pen.

Patrick’s narrative was decidedly less moving but it is not without merit. I had little sympathy for the character but I felt his experience showcased a different aspect of Yeldham’s talent. Every character Patrick encounters, no matter how insignificant has a distinct personality. Not only that, they are without exception multidimensional! Off the top of my head I can’t think of another author who has exerted so much effort in regard to the supporting cast.

The history itself captivated my attention. The last American doughboy died in February of this year fighting for a national memorial to honor the thousands of men who served in the conflict. That fact alone should tell you how much weight WWI carries in this part of the world. Gallipoli, the Somme, Ypres; I am humbled to admit these were little more than names in history book prior to my reading. More than that, I was entirely ignorant of Australia’s involvement in the Great War. Needless to say I spent a fair amount of time referencing the events. Yeldham’s work is entertaining but also fascinating even for those whose knowledge extends only to a few place names and the required background reading for All Quiet on the Western Front.

Yeldham’s story is a beautiful tribute to the Lost Generation, an intensely moving novel that will haunt the reader long after the final page.

We came here too young, too sure of ourselves. We'd begun to believe we were special, like the British papers said. Even their generals praised us, which should've been a warning. Generals sit in safety far behind the lines, they play their games of war and never count the cost. Look, we're as shat-scared as everybody. And why not? Gallipoli was bad, but this is a bloody carnage. There is a dreadful feeling of utter hopelessness here, and we play a game of tag with death every hour of the day.

I am so glad that you have reviewed this book! I read it a few years ago now and turned into an instant Yeldham fan because I just loved the story so much! It wasn't a perfect read, particularly in relation to the modern story, but the storylines were so strong and so moving that it didn't matter.

It must be about time for me to read another Yeldham book. I have his latest sitting on my bookshelf and I know there are a few more in my library as well.

I agree 100%. It didn't matter because the rest of the book was so well done. I too became an instant fan. I just wish his books were easier to get in the United States.

I put in for another of his books for ILL. Can't wait for it to come in.