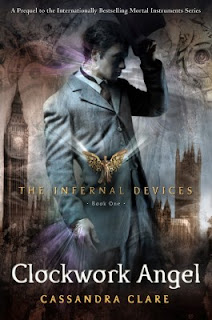 In a time when Shadowhunters are barely winning the fight against the forces of darkness, one battle will change the course of history forever. Welcome to the Infernal Devices trilogy, a stunning and dangerous prequel to the New York Times bestselling Mortal Instruments series.


The year is 1878. Tessa Gray descends into London’s dark supernatural underworld in search of her missing brother. She soon discovers that her only allies are the demon-slaying Shadowhunters—including Will and Jem, the mysterious boys she is attracted to. Soon they find themselves up against the Pandemonium Club, a secret organization of vampires, demons, warlocks, and humans. Equipped with a magical army of unstoppable clockwork creatures, the Club is out to rule the British Empire, and only Tessa and her allies can stop them...

I took a chance with Clockwork Angel for one reason: the cover. It fairly screamed H.G. Wells and Jules Verne. So what if it involved vampires and warlocks, I was tempted. Sadly, the steampunk aspects are minimal, beginning and ending with the concept of a clockwork army. Well executed but hardly competition for Westerfeld’s Leviathan books.

The characters are interesting enough though I feel as if I’ve met William Herondale and Theresa Gray before. There is nothing particularly compelling or distinctive in their makeup. Jem Carstairs is a different story entirely. Physically altered by his terminal condition and dependent on opium of all things, to prolong his existence. I have to hand it to Clare for originality, at least when it comes to her characters. You might have guessed where I am going with this. Two guys, one girl, overused plot device. Personally, I can’t wait till the love triangle twist is put to rest.

Clare’s writing didn’t speak to me. There were moments but I struggled to remain interested between them. Pacing problems aside, I really appreciated the literary references to titles such as The Three Musketeers, Ivanhoe and A Tale of Two Cities. It was a wonderful surprise and a welcome change from authors whose knowledge of the classics ends with Shakespeare, Austen and Bronte.

Solid if not especially memorable. Recommended to fans of Patricia Briggs.

Whatever you are physically, male or female, strong or weak, ill or healthy - all those things matter less than what your heart contains. If you have the soul of a warrior, you are a warrior. Whatever the color, the shape, the design of the shade that conceals it, the flame inside the lamp remains the same. You are that flame.