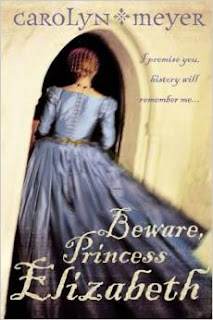 
Elizabeth Tudor's teenage and young adult years during the turbulent reigns of Edward and then Mary Tudor are hardly those of a fairy-tale princess. Her mother has been beheaded by Elizabeth's own father, Henry VIII; her jealous half sister, Mary, has her locked away in the Tower of London; and her only love interest betrays her in his own quest for the throne.


Told in the voice of the young Elizabeth and ending when she is crowned queen, this second novel in the exciting series explores the relationship between two sisters who became mortal enemies. Carolyn Meyer has written an intriguing historical tale that reveals the deep-seated rivalry between a determined girl who became one of England's most powerful monarchs and the sister who tried everything to stop her.

The younger daughter of Henry VIII, Elizabeth’s future was far from certain. She enjoyed the benefits of a royal heir for only a short period, being declared illegitimate about the same time her mother lost her head. She was only returned to the line of succession during Henry’s sixth and final marriage. Her childhood was marked by a series of stepmothers; one dying in child-bed, one set aside, one beheaded and one who was lucky enough to be widowed before Henry tired of her.  Though a child, I believe she took to heart her father’s inconsistencies, noting the lack of security which supposedly accompanied a marriage.


The chances that Elizabeth would ascend the throne were minimal, being behind both her younger brother Edward and older sister Mary in Henry’s Third Succession Act. Both of Henry’s daughters were again struck from the succession by their brother Edward, who left the throne to his cousin the Lady Jane Grey upon his death. Jane’s tenure lasted a mere nine days. Whereafter she was imprisoned in the Tower and eventually executed for high treason.


Hailed at her coronation, Mary soon fell into her subject’s disfavor. Her persecution of Protestants earned her the moniker Bloody Mary. A Protestant herself, Elizabeth’s position was a precarious one. Like her older sister before her, she defied her monarch and held to her convictions and much like her sister, lived in fear that her religion would be her death warrant.

Discontent soon burned as brightly as Mary’s Protestant subjects, lending support to those who wished to see Elizabeth on the throne. The Wyatt Rebellion gave Mary reason to place her sister in the Tower of London. I imagine the sentence was frightening as prisoners rarely escaped the Tower alive but doubly so for Elizabeth whose own mother was executed on the grounds some eighteen years earlier.

Elizabeth as depicted in Beware, Princess Elizabeth is an ambitious young woman. I feel it is a true enough assessment of her character as Queen but premature for the period of Meyer’s story. Elizabeth’s position was never as secure as Meyer implies. Elizabeth also seemed overly confident in her conviction that she would one day rule England. I am sure Elizabeth was aware of the possibility and even took steps to have it realized, but considering the uncertainty that marked her adolescent years I don’t believe she was at any time assured she would take her father's throne. Raised in the knowledge that Queen Anne was beheaded, witness to the trial and execution of Queen Catherine, spectator to the political games that cost Queen Jane so dearly, I remained convinced that Elizabeth was very much aware that the crown offered as much security to a woman as did the state of matrimony.

Historically accurate in detail but I found this installment disappointing in its black and white interpretations. It may be appealing to younger readers but even then, I would suggest looking elsewhere for introductory material on the Virgin Queen.

The moment had arrived. My sister was dead, no longer my enemy. I had survived this first great challenge. Yet as long as I had prepared for this moment, expected it, feared it and desired it, I was overwhelmed with emotion. I fell to my knees...