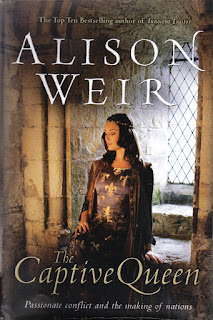 It is the year 1152 and a beautiful woman of thirty, attended by only a small armed escort, is riding like the wind southwards through what is now France, leaving behind her crown, her two young daughters and a shattered marriage to Louis of France, who had been more like a monk than a king, and certainly not much of a lover. This woman is Eleanor, Duchess of Aquitaine, and her sole purpose now is to return to her vast duchy and marry the man she loves, Henry Plantagenet, a man destined for greatness as King of England. Theirs is a union founded on lust which will create a great empire stretching from the wilds of Scotland to the Pyrenees. It will also create the devil's brood of Plantagenets - including Richard Cœur de Lion and King John - and the most notoriously vicious marriage in history.


The Captive Queen is a novel on the grand scale, an epic subject for Alison Weir. It tells of the making of nations, and of passionate conflicts: between Henry II and Thomas Becket, his closest friend who is murdered in Canterbury Cathedral on his orders; between Eleanor and Henry's formidable mother Matilda; between father and sons, as Henry's children take up arms against him; and finally between Henry and Eleanor herself.

NOTE: This review contains spoilers. Please take heed and proceed at your own risk.

What makes a book a memorable reading experience? For me it comes down to three things: a good plot, interesting characters and compelling writing. In reading the back cover, Weir’s The Captive Queen appeared to have two of the three.

Eleanor is a choice candidate for leading lady. I've admired her since I first discovered her story some years ago. So much so that her name was one of the first I considered when naming my daughter. All things considered, it is fair to say I have a well-established preconception of her character. I wish I could say I was happy with Weir's version but I'm afraid our ideas clashed considerably.

Plot is the easy one here. The story was already written and since Weir previously published a nonfiction biography on Eleanor, I am willing to bet she didn’t look far for resources. Eleanor’s is a story worth telling. Regrettably, this detail is the only thing the author and I agree on.

Randy was not a word I associated with Eleanor until I read The Captive Queen. Maybe it was the moment Eleanor "cherished [Henry's member] in both hands." Maybe it was Eleanor's distress over sharing a bed as she would be unable to masturbate with an audience. Maybe it was the phrase “well-endowed stallion.” It doesn't really matter; I was disgusted by the tastelessly pornographic imagery. I don't doubt Eleanor understood the power of feminine sexuality but I take issue with the vulgarity of the Weir's depiction. I simply can't condone her debasing of Eleanor's character to that of a licentious doxy. She obviously had an active sex life and one would assume she welcomed the attention as she had a rather large number of children but that doesn't mean her sole motivation was a sea of raging hormones.

The majority of the supporting cast is undeveloped, not to be confused with underdeveloped, just plain undeveloped. Look at Petronilla. She has one scene when she comes to her sister's court, disappears from the text for fourteen years, has a second scene during John's birth and shortly thereafter, we learn she drank herself to death. Were we readers supposed to care? Eleanor’s sibling isn’t the only character to suffer from Weir’s negligence. Eleanor's eleven children share only a handful of scenes with their mother but rarely utter more than a sentence or two.

I’ve done a fair amount of ranting thus far but I am not above giving credit where it is due. Annoying and flawed though he is, Weir's Henry II is a well-rounded personality who is all too easy to hate. Again, my opinions were not in line with the author's but I feel Weir succeeded in relating her version of Henry. The reader actually experiences the death of his father, his wild tantrums, his relationship with his wife and his love affair with Rosamund which allows us to really understand the character as Weir perceived him. Eleanor does not enjoy the same treatment. The reader is told what to think of Henry's queen as we rarely get into her head outside the bedroom.

The style of writing leaves much to be desired. The first forty-two chapters are mind-numbingly slow. Weir should have summed up the events in a series of flashbacks. This technique would have cut the amount of content considerably but it would have been more appropriate for her abilities. Weir's relaying of facts is wonderful for nonfiction but it makes for very poor storytelling. She sabotaged her own work by biting off more than she could chew.

I firmly believe it is possible to write a compelling and entertaining novel of Eleanor's life, Weir just wasn't the author to do it. Perhaps I will read Penman's novels while I await the publication of Chadwick's books. Readers who are unfamiliar with Eleanor of Aquitaine may find value in The Captive Queen but I would advise those who are well acquainted with her story to steer clear.

None of us know exactly what lies beyond the door to eternity, but if Our Lord is kind, our loved ones will be waiting there in his tender care and we will be in a paradise far beyond our earthly imaginings.