#BookReview: Love from the Ashes by Denise A. Agnew 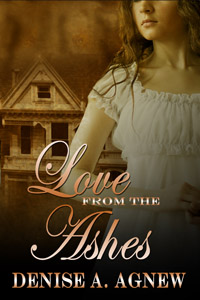 During the 1906 San Francisco earthquake and fire, privileged Grace Wyne and Irish immigrant Nathaniel Dempsey fall in love. They seek a new life together, but society, her family, and nature itself, wage war against them. Their forbidden love is a sure formula for disaster.

Agnew doesn’t have a firm grasp on historic fiction, but she knows how to write a love scene. Perhaps I am still reeling from The Captive Queen, but I felt the incident in the library was beautifully executed even if it did bear a certain resemblance to Atonement.

Grace wasn't my favorite leading lady. She starts strong but quickly loses her momentum. Her drive dissipates as soon as Nate enters her life. Grace and Mary attend suffragette events throughout the book yet the reader is never privy to the goings on of these meetings. This is what I mean when I say that Agnew doesn’t have a great foothold in the genre. The suffragettes weren’t weak willed ladies who sat around sipping tea. The author had the opportunity to mold Grace in the image of these strong, independent, determined women and she let it slip through her fingers. And what is with the nightmares of burning mansions and buildings pitching from their foundations? Was she supposed to be a clairvoyant?

I am going to digress a moment so please bear with me. I spent the better part of the last twenty years living on the San Andreas fault. I’ve experienced a fair number of quakes, nothing compared to the 1906 one of course but Northridge wasn’t exactly a walk in the park. It scared the shit out of me. Smaller quakes made the walls shake and two sent my dog running to my daughter’s side but most of the time, you can’t feel the damned things.

Now back to Love from the Ashes. Agnew includes a handful of quakes prior to the big one. Thus far I have been unable to confirm or discredit their occurrence. I would be upset if I found that Agnew over exaggerated or completely fabricated these events for the purpose of her story. California has enough problems without people thinking the world is about to open up beneath their feet. If they did happen to the degree Agnew described I am upset with her for giving them so much weight in the story. By the morning of April 18th I was bored with the idea. Too much exposure to it underplayed impact of the moment. I was yawning when I should have been shaking in my boots.

I wouldn’t judge it so harshly if I didn’t think Agnew was capable of more. A decent read but lacking in places.

Lust. It had to be lust. Since he'd started working in the Wyne household he hadn't visited Flynn's House of Pleasures down in the Slot. He just couldn't. Somehow it didn't feel right. And it had nothing to do with being a Catholic.

I picked this one up on the free kindle sale as well and do want to give it a go.

It isn't all that bad. I was surprised.