#BookReview: The Log-Cabin Lady by Anonymous 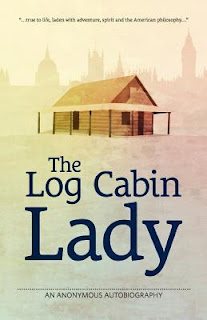 The Log Cabin Lady is the autobiography of a woman who leaves behind a simple life as a pioneer to enter the privileged and alien world of the rich. Feeling isolated and out of place, she struggles to learn the rules and etiquette that her in-laws expect her to follow. To make matters worse, her husband is posted to England and the Log Cabin Lady finds herself grappling with the quirks of British manners and royal protocol. And then come the horrors of the Great War and, through the eyes of the Log Cabin Lady, we watch as the world begins to change. This is a story about overcoming social barriers, developing self-confidence and holding on to the beliefs and values that make us who we are. Written in 1922, this anonymous autobiography spans the period from around 1880 (when the author was aged about three) on to 1897 and being presented at court to Queen Victoria in her diamond jubilee year, through to the long years of the Great War and its aftermath.

The writing itself is repetitive and erratic, altogether amateurish but there is much value in the content. The Log Cabin Lady is the intriguing memoir of a woman who witnessed the dawn of the 20th century. The author, an anonymous society wife, relates her personal history from her humble upbringing to the conflict of 1914. The book leaves much to be desired but offers fascinating insight to the ideas and concerns of a woman who grew up before the suffrage movement as well as the fierce pride the author had for America and her people.

There are twenty million homes in America. Only eight per cent of these have servants in them. In the other ninety-two per cent the women do their own housework; bring up their own children, and take an active part in the life and growth of America. They are the people who help make this country the great nation that it is.