#BookReview: The Winter Palace: A Novel of Catherine the Great by Eva Stachniak 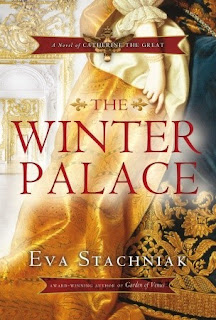 From award-winning author Eva Stachniak comes this passionate novel that illuminates, as only fiction can, the early life of one of history’s boldest women. The Winter Palace tells the epic story of Catherine the Great’s improbable rise to power—as seen through the ever-watchful eyes of an all-but-invisible servant close to the throne.

Her name is Barbara—in Russian, Varvara. Nimble-witted and attentive, she’s allowed into the employ of the Empress Elizabeth, amid the glitter and cruelty of the world’s most eminent court. Under the tutelage of Count Bestuzhev, Chancellor and spymaster, Varvara will be educated in skills from lock picking to lovemaking, learning above all else to listen—and to wait for opportunity. That opportunity arrives in a slender young princess from Zerbst named Sophie, a playful teenager destined to become the indomitable Catherine the Great. Sophie’s destiny at court is to marry the Empress’s nephew, but she has other, loftier, more dangerous ambitions, and she proves to be more guileful than she first appears.

What Sophie needs is an insider at court, a loyal pair of eyes and ears who knows the traps, the conspiracies, and the treacheries that surround her. Varvara will become Sophie’s confidante—and together the two young women will rise to the pinnacle of absolute power.

With dazzling details and intense drama, Eva Stachniak depicts Varvara’s secret alliance with Catherine as the princess grows into a legend—through an enforced marriage, illicit seductions, and, at last, the shocking coup to assume the throne of all of Russia.
Impeccably researched and magnificently written, The Winter Palace is an irresistible peek through the keyhole of one of history’s grandest tales.

Straight out of the gate I have to give Stachniak a lot of points. In a market flooded with Tudor lit, The Winter Palace stands apart. A lover of history and historic fiction, I was overjoyed to see an author branching out. Of course, I wont be happy until someone writes a solid fiction on Crown Prince Rudolf and Baroness Marie Vetsera but Catherine the Great is definitely a step in the right direction.

Overall, I enjoyed the book. There were times I was frustrated with the narrator, Varvara's long absence from court especially, but in general, I liked the female spy. Her ability to adapt to survive was intriguing but the nature of her work was down right fun to read. To Stachniak's credit, Varvara provides tidbits on several members of the court in addition to the young princess. I can't speak to the validity of these accounts but they were entertaining nonetheless.

For all that I appreciated Varvara, I can't say I enjoyed Catherine. She just didn't jump off the page for me. Catherine was a remarkable woman who would redefine her empire over the course of her thirty four year reign. Stachniak's characterization was too delicate to read as strong or astute as her historic counterpart. Likewise, Peter came off as childish and mildly unstable. Classically, Peter was a neurotic, mean and loathsome individual who was consumed by his obsession with the military and a steadfast hatred of his people. In comparison, Stachniak's interpretation was almost boring.

My commentary doesn't end with the issues of characterization. Lets examine the cover art. There is no shortage of artwork of Catherine the Great so I have to ask why the publisher chose to feature a partial portrait of one of her contemporaries for the cover image. While you can't see the head, the slim white hand caressing the golden robe actually belongs to the Empress Maria Theresa, mother of Marie Antoinette.

My second question regards the tagline 'A novel of Catherine the Great.' The book is not about the Empress so much as it is Varvara and her observations of life at court during the reigns of Elizabeth, Peter and Catherine. I feel something like 'A novel of Romanov Russia'  or 'A novel of the Romanov Court' would have been more appropriate when the content is considered. Additionally, I think the family name would generate equal if not more interest. I understand the concept of a head liner but thanks to the conspiracy theories surrounding the of death of Grand Duchess Anastasia Nikolaevna Romanov, the surname is far more recognizable than Catherine's name alone.

On the subject of content I have to concede a certain resemblance to Philippa Gregory's The Queen's Fool. Hannah spies for Lord Robert and Queen Mary, Varvara for Chancellor Bestuzhuv and Empress Elizabeth. Both befriend the individual they are meant to be spying on, Elizabeth and Catherine respectively. Varvara is Roman Catholic in an Eastern Orthodox court and Hannah is Jewish in a... well it depends on the year but you see what I am getting at. Don't misunderstand, I appreciated both novels. I am just commenting that there are more than a few similarities between the two titles. Consider yourself warned.

My personal concerns aside, The Winter Palace is a clever introduction to the Romanov Court. Recommended to fans of Phillip Gregory and Juliet Grey.

Here in the Russian court, I could have warned the pretty newcomer from Zerbst, life is a game and every player is cheating. Everyone watches everyone else. There is no room in this palace where you can be truly alone. Behind these walls there are corridors, a whole maze of them. For those who know, secret passages allow access where none is suspected. Panels open, bookcases move, sounds travel through hidden pipes. Every word you say may be repeated ad used against you. Every friend you trust may betray you.

It always surprises me that there is so little around about Catherine the Great, so I jumped at the opportunity to read this one. I am currently reading Evelyn Anthony's take on her and then I will get to this one!

I would love to read a book on Prince Rupert!

Thus far the only fiction I have found is A Time of Murder at Mayerling by Ann Dukthas. The Nicholas Segalla books are a great young adult fiction series but I want something more mature.

The only thing I have seen is where he is a bit player in a Cynthia Harrod-Eagles book as part of the Morland books.

I hadn't realized he made an appearance in those! Course, I haven't read them yet but thanks for sharing! :D

Ah! I just (literally just) finished Robert Massie's review of Catherine, and Goodreads recommended this to me. I'll see if I can find it at the library—it looks like it might be worth the read.

Haven't been lucky enough to get my hands on that one yet. Hoping I get the chance to read it soon. :)