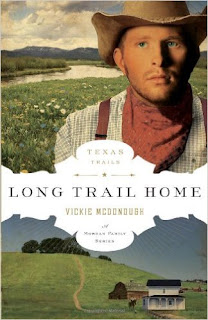 The Long Trail Home is third in a six-book series about four generations of the Morgan family living, fighting, and thriving amidst a turbulent Texas history spanning from 1845 to 1896. Although a series, each book can be read on its own.When Riley Morgan returns home after fighting in the War Between the States, he is excited to see his parents and fiancee again. But he soon learns that his parents are dead and the woman he loved is married. He takes a job at the Wilcox School for the blind just to get by. He keeps his heart closed off but a pretty blind woman, Annie, threatens to steal it. When a greedy man tries to close the school, Riley and Annie band together to fight him and fall in love.But when Riley learns the truth about Annie, he packs and prepares to leave the school that has become his home and the woman who has thawed his heart. Will he change his mind and find the love he craves' Or will stubbornness deprive him from the woman he needs' Through painful circumstances, Riley and Annie learn that the loving and sovereign hand of God cannot be thwarted.

Every series has one. The installment that just isn't on par with the rest. I want to be clear and say this is not a bad book. It is as well-written and endearing as the two preceding novels but the truth is I simply didn't enjoy this one as much as I did the others.

Where Lone Star Trail featured the wave of German immigration in the mid 1800s and Captive Trail focused on the plight of an Indian hostage, Long Trail Home centers on the Wilcox School for the Blind. I mean no offense to the visually impaired or McDonough when I say this but the history just wasn't as interesting to me. Unlike the other books, I've actually studied this topic and there wasn't a lot of new material for me to absorb. I believe McDonough's story will appeal to a lot of readers but personally, I am the wrong person to truly appreciate it.

I've established that I wasn't a fan of the subject matter but is that alone enough for a two star rating? Not in my world. The major factor was key elements that felt recycled from the other Texas Trails books. Annie's desire for a home and sense of belonging mirror Taabe/Billie's motivations in book two and Riley's situation with Miranda was all too reminiscent of Wande's experience with Konrad in book one. These books are marketed as a set so I have to assume that most readers will read the other installments. As book three of the collection, Long Trail Home should not feel like a rehash of its predecessors.

Obviously Long Trail Home is not one my favorite reads but the book has a few things going for it. I was pleased by the way McDonough approached Riley's struggles with PTSD and his determination with regards to aiding the women of the Wilcox school. Recommended to fans of the Spirit of Appalachia series by Gilbert Morris and Aaron McCarver.

Having him around would make things so much more difficult for her. She'd have to stay on guard, always careful no to look into his eyes or walk too fast or do anything out of character for a blind person. Keeping an eye on the children would be a hundred times harder, as would gathering eggs and milking Bertha. Why had he stopped here? Why hadn't he kept riding or asked some rancher for work?