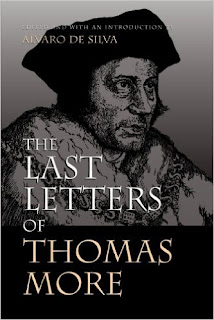 Written from the Tower of London, these letters of Thomas More still speak powerfully today. The story of Thomas More, recently told in Peter Ackroyd's bestselling biography, is well known. In the spring of 1534, Thomas More was taken to the Tower of London, and after fourteen months in prison, the brilliant author of Utopia, friend of Erasmus and the humanities, and former Lord Chancellor of England was beheaded on Tower Hill. Yet More wrote some of his best works as a prisoner, including a set of historically and religiously important letters. The Last Letters of Thomas More is a superb new edition of More's prison correspondence, introduced and fully annotated for contemporary readers by Alvaro de Silva. Based on the critical edition of More's correspondence, this volume begins with letters penned by More to Cromwell and Henry VIII in February 1534 and ends with More's last words to his daughter, Margaret Roper, on the eve of his execution. More writes on a host of topics—prayer and penance, the right use of riches and power, the joys of heaven, psychological depression and suicidal temptations, the moral compromises of those who imprisoned him, and much more. This volume not only records the clarity of More's conscience and his readiness to die for the integrity of his religious faith, but it also throws light on the literary works that More wrote during the same period and on the religious and political conditions of Tudor England.

As the title suggests, the book is the collected correspondence of Thomas More in the years prior to his execution. Poignant and thought provoking, I found the letters themselves fascinating even if they were challenging to read. Be warned, don't attempt this one if you struggle with Old English. In truth, Last Letters gave me more trouble than Chaucer's Canterbury Tales.

Without the introduction this would be a four star book but I took issue with Silva's commentary. I felt it was ridiculously lengthy and long winded but also found it detrimental to my enjoyment of the missives. His analytical dissection and exposition undermined the emotion and power of More's words. On top of that it was flat out boring to read. If I wanted a dissertation, I would have attended a lecture dude. Bad form friend, bad form.

Those who follow my reviews are aware I usually close by recommending additional titles but Last Letters isn't that kind of book. The nature of the it is such that I can't recommend it to anyone but die hard scholars of the humanist/statesman.

I neither look for, nor long for, but am well content to go, if God call me hence forth tomorrow.

"If I wanted a dissertation, I would have attended a lecture dude."

I generally dislike introductions, especially when they get long winded. I prefer to make up my own mind.

Agreed. More than half of this text is Silva glorifying the martyr. I'm sort of on the Thomas More kick at the moment and I really wanted to read the letters but of the whole, this left me wanting to throw things at Silva's head. :/