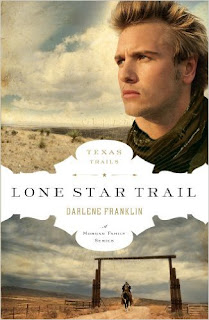 The six-book series about four generations of the Morgan family living, fighting, and thriving amidst a turbulent Texas history spanning from 1845 to 1896 begins with Lone Star Trail.  Although a series, each book can be read on its own.

Judson "Jud" Morgan's father died for Texas' freedom during the war for independence. So when the Society for the Protection of German Immigrants in Texas (the Verein) attempts to colonize a New Germany in his country, he takes a stand against them.

After Wande Fleischers' fiancé marries someone else, the young fraulein determines to make a new life for herself in Texas. With the help of Jud's sister Marion, Wande learns English and becomes a trusted friend to the entire Morgan family.

As much as Jud dislikes the immigrant invasion, he can't help admiring Wande's character. She is sweet and cheerful as she serves the Lord and all those around her. Can the rancher put aside his prejudice to forge a new future?  Through Jud and Wande, we learn the powerful lessons of forgiveness and reconciliation among a diverse community of believers.


I confess I did not intend on reading this particular book. It was the second book of the Texas Trail series, Captive Trail, that caught my attention but alas, I am something of a compulsive reader. I find it incredibly difficult to start a series anywhere but the beginning. So, naturally, I set about locating a copy of Lone Star Trail for my literary enjoyment.


I love the amount of Texas history in this book.  I went to school in CA which afforded me a wonderful education with regards to Father Serra and the forty-niners but not a whole lot else. I’m not joking, we skipped Lewis and Clark and most of western expansion with two notable exceptions: Little Big Horn and the Alamo. Funny when you think about it as the United States lost both but I digress. My point here is that Franklin exposed me to a chapter of American history that I didn’t even know existed and, I hope I don’t sound arrogant when I say this, that is really saying something.

Franklin’s story revolves around Jud, an American horse rancher and Wande, a young immigrant. In the mid eighteen hundreds, thousands of Germans left Europe to establish themselves in rural Texas. Many of these individuals were unprepared for what awaited them across the sea and few were welcomed when they reached our shores. In my humble opinion, Franklin competently recreated the challenges faced by the new arrivals but it was her exceptional handling of the xenophobic sentiments of the Americans that made her work so fascinating.


Lone Star Trail is a wholesome and enjoyable story but I am not without criticism. Creating a believable cast is difficult but a multilingual collection of individuals presents a unique set challenges for both the author and the reader. The use of the German language is admirable but it is really difficult to read. I realize Franklin was trying to stress the communication barriers but at the end of the day readability is the bigger factor.


On a personal note, the references to the famous breeder were tediously repetitive. I grew up watching live action classics on vault Disney so maybe I take for granted that not everyone on the planet is aware that Justin Morgan Had a Horse but even so, this was leaning towards overkill. Again, just my personal opinion, but once was enough.


All together, Lone Star Trail is a pleasant opener to the Morgan Family saga. Recommended to fans of the Spirit of Appalachia series by Gilbert Morris and Aaron McCarver.

Wande couldn't be as selfless as she claimed. No one was. No German was. He wouldn't tell her that the man who had jilted hoer so cruelly had asked him to give her a job. Or that her presence in his house disturbed his peace of mind.