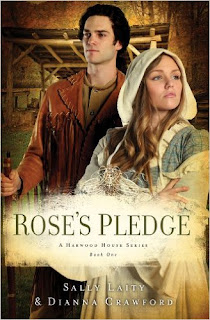 Step back into the early days of America, where Rose Harwood and her sisters become indentured to the highest bidders. When Rose’s new owner takes her deep into Indian Territory, a young frontiersman named Nate Kinyon tags along, hoping to save Rose from the machinations of a grubby trader and the appraising looks of young braves. How much is he willing to pay—in dollars and sense—to redeem the woman he loves? And how much is Rose willing to sacrifice for his protection? 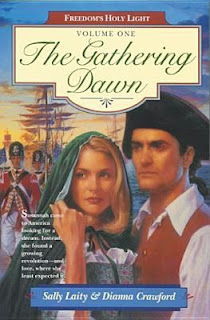 Rose's Pledge begins in Bath but quickly takes us across the sea and deep into the wilderness and the center of a political firestorm about to erupt into what we know as the French and Indian War. Bonded in service, Rose Harwood has little choice in traversing miles into the unknown and soon finds herself living among the natives in a world she never imagined. Over the course of the novel we witness both the evolution of her faith and initial outbreak of conflict in the Ohio River Valley.

First off, I have to say I jumped at the chance to review this book because a) I love history and b) Sally Laity and Dianna Crawford are the ladies who turned me on to inspired fiction. Many authors in this genre focus on their message but these two ladies have mastered the art of weaving a remarkable amount of history into their novels in addition to their spiritual message. There are strong religious themes in their work but I find the context of their stories on par with some of my favorite secular writers. Needless to say I was excited to find the two had reunited and were collaborating once again.

That being said, the words 'indentured servant' set off warning bells. There are a lot of directions to take the concept but all the same, Laity and Crawford tackled the subject pretty extensively in The Gathering Dawn. The bells grew significantly louder in a scene where Rose stood on the deck of the Seaford Lady as it arrived in port. The brief conversation she shared with Seaman Polk is more than a little reminiscent of the exchange between Susannah Harrington and Seaman Yancy Curtis on the deck of another ship upon their arrival in the colonies in the opening scene of the aforementioned novel. Much to my relief the story took a new direction and bells soon ceased. Unfortunately, the respite was short lived. Not only does Nate Kinyon have the same solution to Rose's situation as Daniel Haynes did for Susannah but he is as inarticulate as his counterpart when it comes to propositioning the lady in question. At this point it really didn't surprise me that the ladies themselves reacted in an identical manner and brushed off their suitors with the same level of indignation.

As a fan I found this recycling sharply disappointing but it begged the question as to whether or not I should downgrade my rating. Having just completed Long Trail Home, a book where recycled material played a key role in determining my overall opinion, I wondered if it was hypocritical to let this one slide. Ultimately I decided that as a reviewer I needed to mention the similarities but it would not factor in my rating of the novel. Before you start rolling your eyes be assured I struggled with this one. The simple explanation is that Long Trail Home paralleled other books in the Texas Trail series where Rose's Pledge resembles a completely different collection that was published nearly two decades ago. Additionally, Rose's Pledge covers a significantly wider historic scope, the details of which provide more than adequate compensation for us older readers.

On the subject of content I want to mention the sub-story of Hannah Wright. She appears in a single chapter but I found her scenes to some of the most powerful of the entire novel. I  wont lie, the imagery wont appeal to everyone, especially readers whose imaginations are as vivid as my own. Ever a fan of realistic depictions in literature, the graphic quality of these scenes appeals to my historian nature. White settlers and traders who pushed west of the established colonies traversed an invisible line, essentially their movements placed them in the middle of a war zone. Tragically , many of these individuals were caught in the crossfire as England, France and assorted Indian nations vied for control of the territory. Hannah represents these individuals and the description of her experience was appropriately intense.

All things considered, I enjoyed Rose's Pledge and while I look forward to the next installment of the Harwood House series, it is not without trepidation. Mariah's character draws comparison to Jane, the flighty marriage obsessed sister of Daniel Haynes and I don't know if I'll be as inclined to dismiss the rehashing a second time. Recommended to fans of The Midwife of Blue Ridge and the Freedom's Holy Light series.

If Rose wanted him to be one of those Christians who shunned anyone who came from another country or had darker skin, she was barking up the wrong tree. As far as he was concerned his God didn't mind folks having a little fun now and then either.