#BookReviw; I'll Be Seeing You by Margaret Mayhew 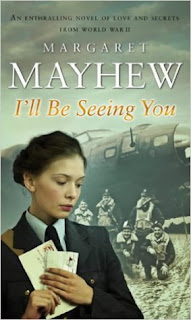 When Juliet Porter's mother dies, she leaves Juliet some old letters and a photograph which shatter all her previously-held beliefs. They show that her real father was an American bomber pilot in the second world war, some forty years before, and that he had met her mother while serving in England. Armed only with this photo, Juliet sets out to trace her real father, and eventually finds the airfield where he served.

In 1943, Juliet's mother Daisy is in the WAAF and stationed at the airfield which is taken over by the American airmen at a moment's notice. She falls in love with a bomber pilot who is then posted missing, presumed dead; pregnant and grieving, she marries a long-term admirer only to discover, at the end of the war, that her pilot had survived...


Most history fanatics hold specific eras close to their hearts and I am no exception. WWII is one of the periods I can't get enough of. The title reference to Frank Sinatra didn't hurt either. That being the case, I anticipated liking this book a lot more than I did. Perhaps I expected too much going into it but I found Mayhew's work mediocre at best.

Juliet, a divorcee with a grown daughter of her own, is rattled by her mother's deathbed admission. Angry and confused she struggles to accept the truth of her paternity and understand the circumstance of her existence. Eventually, curiosity proves too much. Left with only a sketchbook, an unmarked photograph and fragmented memories of her mother's war experiences, Juliet sets out to discover what she can about the man who stole her mother's heart.

As the granddaughter of an American solider and an English woman, I feel like a hypocrite for saying I found this story overly romantic and unrealistic. Daisy's story was fine though there wasn't a lot of information regarding her position with WAAF and I never felt the intensity I know exists when your significant other is on the front lines. Howard's story was flat out laughable. The entirety of his twenty plus missions are wrapped into a mere thirty pages, the bulk of which focus on his concealed tenure in a French barn. Boring doesn't do it justice.

Juliet's story had a lot of potential. American soldiers fathered more than 37,000 children while overseas, many of whom were never acknowledged. Several organizations exist to aid these individuals but the vast majority have little luck locating their fathers. American privacy laws are difficult to work around but time is biggest obstacle. I think this is why I found Juliet's story so difficult to swallow. She experiences a few hiccups but she completes the puzzle in a matter of months. Mayhew wrapped everything up in a pretty little package that is too improbable to be realistic.

I'll Be Seeing you is a sugary novel with little to no action sequences and limited historic detail. Sadly, not my kind of book. Recommended to fans of light romance.

She was marble-constant, as Shakespeare also said. An illegitimate baby was a huge black mark in those days, remember. She could easily have had you adopted, but she didn't. She hung onto you and she married another man because she thought it was the best thing for you.