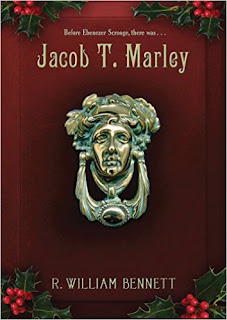 
Marley was dead to begin with... These chillingly familiar words begin the classic Christmas tale of remorse and redemption in A Christmas Carol by Charles Dickens. Now R. William Bennett rewinds the story and focuses the spotlight on Scrooge s miserly business partner, Jacob T. Marley, who was allowed to return as a ghost to warn Scrooge away from his ill-fated path. Why was Marley allowed to return? And why hadn t he been given the same chance as Ebenezer Scrooge? Or had he? Written with a voice reminiscent of Dickens, Jacob T. Marley is to A Christmas Carol as the world-famous Wicked is to The Wizard of Oz as this masterfully crafted story teaches of choices, consequences, and of the power of accountability. It is sure to become a Christmas favorite.

If there is a truly tragic character in Charles Dickens’ A Christmas Carol, it is Jacob Marley. Ebenezer Scrooge gets a second chance at redemption but Marley is condemned to shoulder the weight of his transgressions for all eternity. Not a whole lot of justice in that is there? Now apparently, I’m not the only who feels this is a serious offense. Author R. William Bennett also concluded Dickens treated Marley unfairly and being a far more creative person than myself, he penned a positively delightful reprisal of the classic tale in an effort to address the maltreatment.

I can honestly say this is one of the best retellings I have come across. It is also one of only three that I rate higher than the work that inspired it. I’m not exactly a fan of A Christmas Carol but that made Bennett’s job all the more challenging. It is a testament to his skill I enjoyed Jacob T. Marley as much as I did.

In an interesting twist Bennett’s story exposes the extent of Jacob’s influence on Ebenezer. As a young man, Scrooge stands on the edge of a great precipice. He understands greed but it is not until he forms a partnership with Marley that Ebenezer crosses over and begins to transform into the greedy miser we all know so well. Only in death is Marley able to recognize his role in the molding of Scrooge’s character, whereupon he swears he will do all in his power to save his former associate from damnation.

Bennett not only respects and follows the familiar plot of the original; he also imitates the language of the holiday favorite. The extra effort goes a long way in recreating the feel of A Christmas Carol and helps the two stories blend seamlessly together.

A heartfelt recreation of the spirited favorite. Recommended to fans of This Dark Endeavor by Kenneth Oppel and The Looking Glass Wars by Frank Beddor.

Marley was, of course, perturbed at this younger version of himself. And of the fact that Scrooge was exactly that younger version, Marley was admiring as well, the way an opponent who had just been checkmated might feel about the one who possessed the skill to do it to him.