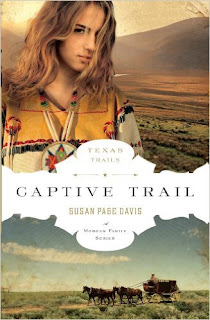 The Captive Trail is second in a six-book series about four generations of the Morgan family living, fighting, and thriving amidst a turbulent Texas history spanning from 1845 to 1896. Although a series, each book can be read singularly.

Taabe Waipu has run away from her Comanche village and is fleeing south in Texas on a horse she stole from a dowry left outside her family's teepee. The horse has an accident and she is left on foot, injured and exhausted. She staggers onto a road near Fort Chadbourne and collapses.

On one of the first runs through Texas, Butterfield Overland Mail Company driver Ned Bright carries two Ursuline nuns returning to their mission station. They come across a woman who is nearly dead from exposure and dehydration and take her to the mission.With some detective work, Ned discovers Taabe Waipu is Billie Morgan. He plans to unite her with her family, but the Comanche have other ideas, and the two end up defending the mission station.

Through Taabe (Billie) and Ned we learn the true meaning of healing and restoration amid seemingly powerless situations.

I think I have mentioned I have a habit of picking up books because I’m attracted to the covers. This is yet another example. The contrasting blues and oranges are eye catching but there is something about the girl’s face, half hidden behind her hair that grabbed my attention.

Captive Trail offers a unique look at one of the many dangers faced by frontier families for it was common practice among the Texas tribes to take captives. Some were tortured and/or ransomed but many were assimilated into the tribes as slaves or family members. The experience is illustrated in the Texas Trail series through the story of Taabe aka Billie Morgan. Picking up eleven years after the events of Lone Star Trail, Taabe/Billie has lived more than half her life among the Comanche. Faced with an unwanted marriage, Taabe/Billie makes a desperate bid for freedom and the past she barely remembers.

I have to hand it to Davis. Like the previous novel, Lone Star Trail, the author had to struggle with a multilingual cast. Instead of flooding the text with bits of Comanche, Davis focused on the frustration the characters felt at their inability to communicate. As a reader, I really appreciated her handling of the issue. It was easy to read but at the same time, it offered a very personal perspective on the characters.

I was also impressed by Davis' handling of the more controversial events of Taabe/Billie's time with the Comanche. I don't want to give anything away so I wont go into detail but it is a very realistic possibility in the life a captive. A applaud the author's decision to include it.

Captive Trail is a heartwarming edition to the Morgan Family saga and a charming follow-up to Lone Star Trail. Recommended to fans of the Spirit of Appalachia series by Gilbert Morris and Aaron McCarver.

Once Taabe had drawn back the curtain over the doorway and peered in. Several candles flickered within. Unlike the other rooms, this one had a floor of flat stones. Sister Natalie was kneeling at a low bench, facing the wall farthest from the one slit of a window. On the wall was a figure like the one in Taabe's room, only larger. The dying man on the torture rack. Taabe shivered and dropped the edge of the curtain. Someday, when she knew enough words, she would ask Sister Adele about that man.

this looks good..thanks for sharing!

NP! Glad you enjoyed my review.