#BookReview: This Dark Endeavor: The Apprenticeship of Victor Frankenstein by Kenneth Oppel 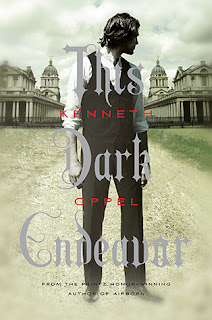 The purest intentions can stir up the darkest obsessions.


In this prequel to Mary Shelley’s gothic classic, Frankenstein, 16-year-old Victor Frankenstein begins a dark journey that will change his life forever. Victor’s twin, Konrad, has fallen ill, and no doctor is able to cure him. Unwilling to give up on his brother, Victor enlists his beautiful cousin Elizabeth and best friend Henry on a treacherous search for the ingredients to create the forbidden Elixir of Life. Impossible odds, dangerous alchemy and a bitter love triangle threaten their quest at every turn.

Before I begin I think I should confess something. I have never attempted to read Frankenstein. I've never even watched the films. Despite my abiding love of classic movie monsters I have never been remotely interested in the Modern Prometheus. As such this review is nearly free of comparison. It is impossible not to know bits and pieces of the story but for sake of argument, lets consider me a Shelley virgin.

Dr. Frankenstein is sort of a psychopath when you think about it. I mean, it takes a certain level of insanity to dig up, assemble and reanimate the dead. Disturbing though is sounds, I love the idea of exploring where this obsession comes from. The inclusion of mysteries chateau, a dark library and secret experimentation in the field of alchemy didn't hurt either. I understand from other reviews that Oppel took certain liberties with regards to the original but as I have no no particular regard for Shelley's work, I found the story enjoyable.

I have to assume there are references my limited knowledge base failed to recognize but I am familiar with Polidori. For those who don't know, John William Polidori was a contemporary of Shelley and author of The Vampyre. Considered the father of the romantic vampire genre his work predated Bram Stoker's masterpiece by nearly eighty years. Obviously outshone by his successor, Polidori doesn't enjoy the same notoriety and I appreciated the nod Oppel afforded him in This Dark Endeavor.

I rarely watch book trailers or author interviews but I made an exception with this book and watched both while polishing my review. First of all, I love that the book trailer features the same building I decided would represent chateau Frankenstein during my reading. I try not to indulge my ego but a small part of me likes that I was on the same page as the creator and marketers of the novel.  On the other hand, I was disappointed by the author interview. I enjoyed what Oppel had to say about the development of his idea but the admission that ARCs were used to sell the rights to the producers of Twilight irked me. I'm of the opinion that authors should care more for their readers and personal integrity than their pocketbooks and find Oppel's actions both distressing and unattractive.

My opinion of the author's actions aside, This Dark Endeavor is gratifyingly gothic tale of mystery and intrigue. Recommended to fans of The Raven Bride by Lenore Hart and Dracula In Love by Karen Essex.

I dreamed of fame and wealth. But looking upon Elizabeth's face at that moment, I suddenly knew there was something I wanted even more.