The Hatmaker's Heart by Carla Stewart 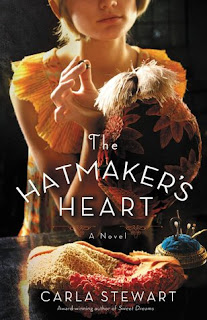 For Nell Marchwold, bliss is seeing the transformation when someone gets a glimpse in the mirror while wearing one of her creations and feels beautiful. Nell has always strived to create hats that bring out a woman's best qualities. She knows she's fortunate to have landed a job as an apprentice designer at the prominent Oscar Fields Millinery in New York City. Yet when Nell's fresh designs begin to catch on, her boss holds her back from the limelight, claiming the stutter she's had since childhood reflects poorly on her and his salon. But it seems Nell's gift won't be hidden by Oscar's efforts. Soon an up-and-coming fashion designer is seeking her out as a partner of his 1922 collection. The publicity leads to an opportunity for Nell to make hats in London for a royal wedding. There, she sees her childhood friend, Quentin, and an unexpected spark kindles between them. But thanks to her success, Oscar is determined to keep her. As her heart tugs in two directions, Nell must decide what she is willing to sacrifice for her dream, and what her dream truly is.

My interest in Carla Stewart’s The Hatmaker’s Heart began, as so many of my selections do, with the cover. I like the detail and think the direction of the lighting quite interesting. The contrast it creates over the figure and her worktable caused me to pause, and ultimately request a copy of the title for review. Unfortunately, Stewart’s content failed to do the same and looking back, I can’t help thinking the time I spent with the piece wasted.

Forgive my blunt assessment, but I found Stewart’s treatment of the material mundane and lifeless. Nell Marchwold didn’t interest me in the least and I had great difficulty rousing sympathy for her predicament. She is a naïve Mary Sue who I felt lacking in both depth and intrigue. I caught myself yawning at her expense on more than one occasion and grew increasingly annoyed with her as the story progressed.

The author’s interest in period fashion is evident and appropriate considering the scope of the narrative, but I can’t help wishing she’d put the same effort into recreating the atmosphere of New York in the nineteen twenties. I could well envision the hemlines and shape of this or that ensemble, but such detail and texture were absence in Stewart’s portrayal of the city itself and I had difficulty envisioning the world as Nell saw it.

Stubborn to a fault, I finished the novel not for pleasure so much as pride. Ridiculous as it sounds, I refused to be defeated by these three hundred and some odd pages of text. Many readers seem to have enjoyed Stewart’s brand of storytelling, but I am forced to admit it held little satisfaction for me.

Nell held her breath. Yes, she’d wished for that, too, but an old nursery rhyme ran singsong through her head. If wishes were horses, beggars would ride.