Naked: A Novel of Lady Godiva by Eliza Redgold 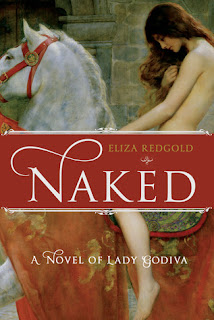 We all know the legend of Lady Godiva, who famously rode naked through the streets of Coventry, covered only by her long, flowing hair. So the story goes, she begged her husband Lord Leofric of Mercia to lift a high tax on her people, who would starve if forced to pay. Lord Leofric demanded a forfeit: that Godiva ride naked on horseback through the town. There are various endings to Godiva's ride, that all the people of Coventry closed their doors and refused to look upon their liege lady (except for 'peeping Tom') and that her husband, in remorse, lifted the tax. Naked is an original version of Godiva's tale with a twist that may be closer to the truth: by the end of his life Leofric had fallen deeply in love with Lady Godiva. A tale of legendary courage and extraordinary passion, Naked brings an epic story new voice.

Silly me right? Such is life, but a book is a book and I enjoy a challenge so it should come as no surprise that I poured myself a steaming mug of caribou coffee, opened my notepad and went to work. Three hundred and some odd pages later, well, I can’t say my opinion has changed, but I didn’t really expect it would so I suppose that a moot point.

Atmospherically Redgold did not capture the period to my satisfaction. My introduction to historic fiction began with eleventh century England and all things considered, I’ve a fairly high standard of expectation. Fair or not, Redgold’s interpretation felt basic in comparison and I struggled to see Coventry through her heroine’s eyes.

The romantic elements of the story were stronger than I expected, but had I done my homework I’d have noted Redgold has a couple of romance titles to her name. I don’t hold it against her, she handled the more intimate moments of the story rather well, but they did catch me off guard and I can’t help wishing there’d been some hint of them in jacket description.

I felt Redgold’s interpretation of Godiva straightforward and lacking in depth, but her understanding and illustration of the political stage impressed me. Redgold’s presentation of the ruling class and their affairs was clear enough for those unfamiliar with the material to grasp, but not so rudimentary as to bore readers who might already possess a comprehensive understanding of Godiva’s situation.

Redgold’s narrative style felt awkward and dialogue heavy, but the plot was certainly more coherent than that showcased in Galland’s Godiva. Unfortunately neither packed much of a dramatic punch and while each proved a pleasant enough diversion, neither fully captivated my imagination.

Shame. I licked it on my lips, tasted its vinegar on my tongue. Only moments before I’d told Aine I would feel no shame bringing justice. Now my head drooped like a harebell on a stem.