A Flying Affair by Carla Stewart 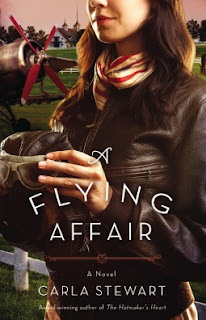 Daredevil Mittie Humphreys developed her taste for adventure on horseback, on her family's prosperous Kentucky horse farm. But her love of horses is surpassed by her passion for the thrill of the skies, especially since the dashing pilot, Ames, first took her up in his plane. When handsome British aviator Bobby York offers her flying lessons, he is equally surprised—and beguiled—by Mittie's grit, determination, and talent. Soon, Mittie is competing in cross-country air races, barnstorming, and wing-walking. But when Calista "Peach" Gilson, a charming Southern belle, becomes her rival in both aviation and in love, Mittie must learn to navigate her heart as well as the skies.

My Netgalley account is flooded with unread titles which annoys me to no end. In an attempt to address the situation, I challenged myself to buckle down and tackle the backlog one story at a time. In light of that goal, I fired up my kindle, picked a book at random, and began reading. Unfortunately the first book I picked was Carla Stewart’s A Flying Affair and the experience was less than satisfactory.

A companion piece to The Hatmaker’s Heart, I found the novel suffered many of the structural issues I noted in its predecessor. The narrative was dull and Stewart’s heroine was something of a Mary Sue. There is little to no atmospheric detail in the narrative, the plot was predictable and the characters mundane. The author’s interest in fashion is once again evident, but it made less sense this time around as Mittie is not part of the fashion industry.

I took further issue with how little of the novel was dedicated to aviation. Mittie’s emersion in the field took ages to get off the ground, but it also competed with her and passion for horses. There was simply too much going on in Mittie’s world and I felt Stewart’s inability to pare down created a disjointed and incohesive patchwork of plot. To make matters worse, the author’s illustration of the aviation as a profession lacked authenticity. I hadn’t liked the characters in The Beauty Chorus, but Brown’s descriptions of the cockpit, the mechanics of and mental focus required to fly left Stewart in the dust.

Long story short, A Flying Affair was a total and complete bust. On reflection, I probably shouldn’t have attempted it, but I now know for certain that Stewart and I are not a good fit and will make a point of avoiding her work in the future.

“Serendipity that day was meeting you and falling in love with flying all in one afternoon.”