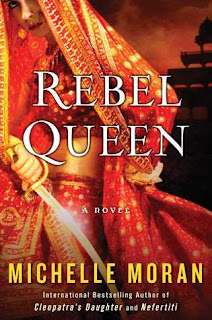 When the British Empire sets its sights on India in the 1850s, it expects a quick and easy conquest. After all, India is not even a country, but a collection of kingdoms on the subcontinent. But when the British arrive in the Kingdom of Jhansi, expecting its queen to forfeit her crown, they are met with a surprise. Instead of surrendering, Queen Lakshmi raises two armies—one male, one female—and rides into battle like Joan of Arc. Although her soldiers are little match against superior British weaponry and training, Lakshmi fights against an empire determined to take away the land she loves. Told from the perspective of Sita, one of the guards in Lakshmi's all-female army and the queen’s most trusted warrior, The Last Queen of India traces the astonishing tale of a fearless ruler making her way in a world dominated by men. In the tradition of her bestselling novel Nefertiti, which Diana Gabaldon, author of the Outlander series, called “a heroic story with a very human heart,” Michelle Moran once again brings a time and place rarely explored in historical fiction to rich, vibrant life.

I knew nothing about Queen Lakshmi or the Indian Rebellion of 1857 when I picked up Michelle Moran’s Rebel Queen. My eye was drawn to the unusual locale and an eagerness to experience a story that was both foreign and entirely unfamiliar. I’d enjoyed Moran’s work in the past and was optimistic of my prospects, but looking back I can’t help feeling the reality fell short of my expectations.

In theory, Sita was a well-positioned narrator, but I don’t feel Moran’s treatment of the character lived up to the jacket description. Sita spends relatively little one-on-one time with Queen Lakshmi and much like Varvara in Eva Stachniak’s The Winter Palace, is wholly removed from the queen during the most exciting and important events of the narrative. The emotional and at times physical distance between Moran’s heroine and her headliner is substantial and I felt that fact limited the author’s ability to convincingly develop the queen’s complexities and personal views.

I was further frustrated by the pacing and tone of the narrative. I truly appreciated the cultural insight Moran offered throughout the text, but I spent most of my reading waiting for something to happen. Eighty percent of the novel focuses on some form of sisterhood and that’s great, but I personally found the quiet intimacy of those relationships tedious and dull. I crave movement, action, political tension and urgency, but such moments didn’t arrive till the eleventh hour and felt exceeding awkward tacked on in final moments of Sita’s story.

At the end of the day, I learned a lot from Rebel Queen, but I can’t help wondering if my personal tastes would be better satisfied by the work of John Masters or Christopher Nicole. I don’t regret the time I spent with this book, but I don’t think it Moran’s strongest release and would have reservations recommending it forward.

“We've all done things we'd rather keep in the dark. It's only by shedding light on them that our demons can disappear.”