Islands of the Damned: A Marine at War in the Pacific by R.V. Burgin 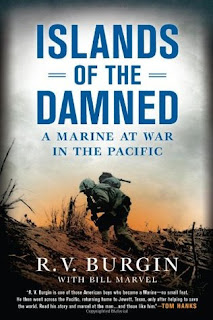 This is an eyewitness—and eye-opening—account of some of the most savage and brutal fighting in the war against Japan, told from the perspective of a young Texan who volunteered for the Marine Corps to escape a life as a traveling salesman. R. V. Burgin enlisted at the age of twenty and, with his sharp intelligence and earnest work ethic, climbed the ranks from a green private to a seasoned sergeant. Along the way, he shouldered a rifle as a member of a mortar squad. He saw friends die and enemies killed. He saw scenes he wanted to forget but never did—from enemy snipers who tied themselves to branches in the highest trees, to ambushes along narrow jungle trails, to the abandoned corpses of hara kiri victims, to the final howling banzai attacks as the Japanese embraced their inevitable defeat. An unforgettable narrative of a young Marine in combat, Islands of the Damned brings to life the hell that was the Pacific War.

It sounds horrible, but I didn’t set out to read Islands of the Damned. Truth is it was one of those right time right place selections, the kind of thing that more or less falls into one’s lap. I’d just watched The Pacific for the umpteenth time and got it into my head to do a little background reading. With the Old Breed and Helmet for My Pillow were first on my list, but unfortunately neither was available at my local library. A quick search for other titles on similar topics turned up several pieces including Battleground Pacific and Red Blood, Black Sand, but it was Burgin’s name that jumped from the catalogue screen which is how the audio edition of his memoir ended up accompanying me home.

A friend of mine was moving so I listened to much of the book the following weekend as I repeatedly traversed the stretch of freeway that bisects Camp Pendleton. Traffic was slow, stop-and-go most of the way, and I was thankful for the distraction Burgin’s work afforded. Alone in my SUV, I was able to focus on Sean Runnette’s narration, but I soon found myself at odds with the sedate tone of Burgin’s prose and frustrated by the lack of intensity presented his audience. The comparison isn’t fair, but the book didn’t pack the punch of Leckie or Sledge’s recollections and the end result made it much harder for this particular reader to remain engaged in the account.

I don’t argue the value of the material and I like the sense of perspective Islands of the Damned offers alongside With the Old Breed, but as a standalone I felt the memoir challenging. It isn’t as comprehensive as other titles and relies heavily on singular interpretation. The author’s voice is mild and he has a tendency to repeat his favorite personal anecdotes. I felt his romance with Florence Risely heartwarming and I was stuck by his memories of Captain Andrew ‘Ack-Ack’ Haldane and First Lieutenant Edward ‘Hillbilly’ Jones, but I prefer those accounts that delve into the complex psychology of life on the front lines and that was not a topic Burgin felt the need to explore length.

I’m glad to have experienced Islands of the Damned, but I’m not ashamed to admit I struggled with it. I went in with an expectation it didn’t achieve and though I’d certainly recommend the title to those interested in WWII’s Pacific Theater, I can’t claim it my favorite Marine Corps memoir of the period.

What sticks with me now is not so much the pain and terror and sorrow of the war, though I remember that well enough. What really sticks with me is the honor I had of defending my country, and serving in the company of these men. They were good Marines, the finest, every one of them.