The Blood Countess by Andrei Codrescu 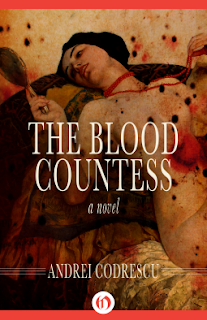 A Hungarian-American journalist confronts the beauty and terror of his aristocratic heritage in this suspenseful chronicle of murder and eroticism. Turmoil reigns in post-Soviet Hungary when journalist Drake Bathory-Kereshtur returns from America to grapple with his family history. He's haunted by the legacy of his ancestor, the notorious sixteenth-century Countess Elizabeth Bathory, who is said to have murdered more than 650 young virgins and bathed in their blood to preserve her youth. Interweaving past and present, The Blood Countess tells the stories of Elizabeth's debauched and murderous reign and Drake's fascination with the eternal clashes of faith and power, violence and beauty. Codrescu traces the captivating origins of the countess's obsessions in tandem with the emerging political fervor of the reporter, building the narratives into an unforgettable, bloody crescendo. Taut and intense, The Blood Countess is a riveting novel that deftly straddles the genres of historical fiction, thriller, horror, and family drama.


I’m tempted to leave my thoughts on Andrei Codrescu’s The Blood Countess at that, but I think my fellow readers deserve an explanation. That said, I want to be very clear that I did not finish this book. I made it through 45% of the narrative and bailed. I did not bother skimming through to the end as there seemed no point in subjecting myself to material I found both salacious and repugnant. I’d award a single star to the portion I completed, but as I did not finish the book I’ve chosen to leave this review unrated.

I am familiar with Elizabeth Bathory, but my objections to the material within these pages have nothing to do with blood baths and dead virgins. I don’t know how the author utilized the material later on, but the obscene sexual nature of the chapters I did experience didn’t sit well with me. Drake’s climax in the iron maiden was uncomfortable, Elizabeth’s hands on approach to Johannes’ encounter with the gypsy disturbed me, and don’t get me started on the harlequin doll. I’ll give Codrescu the benefit of the doubt and assume the material was meant to elicit the response it did, but the depravity he depicted went too far and I lost any and all interest in the story he was trying to tell.

Speaking of story, I felt the contemporary elements of the piece should have been scrapped altogether. I didn’t care a whit for Drake or his experience. These sections were tediously slow and dominated by exposition better suited to nonfiction. I will note the religious elements of Elizabeth’s story arc were interesting, but Codrescu’s narrative is so drawn out that the ideas felt fractured and incoherent.


The description claims the novel unforgettable and for once I honestly agree with the sales pitch. The Blood Countess is unforgettable, but for all the wrong reasons. Not for me and not something I could possibly recommend.

Elizabeth Bathory was a powerful woman in a time of powerful women. She was a contemporary of Queen Elizabeth. Educated in the highest traditions of the late Renaissance, she was the absolute ruler of her domains, which were situated at the center of Christian Europe. If it was true that she tortured and killed, bathed in blood, and ate the flesh of young girls, these charges had to be carefully considered by those who would judge her.