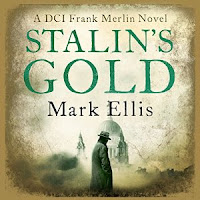 December 1938. Moscow. Josef Stalin has lost some gold. He is not a happy man. He asks his henchman Beria to track it down. September 1940. London. Above the city the Battle of Britain rages and the bombs rain down. On the streets below, DCI Frank Merlin and his officers investigate the sudden disappearance of Polish RAF pilot Ziggy Kilinski while also battling an epidemic of looting unleashed by the chaos and destruction of the Blitz. Kilinski’s fellow pilots, a disgraced Cambridge don, Stalin’s spies in London, members of the Polish government in exile and a ruthless Russian gangster are amongst those caught up in Merlin’s enquiries. Sweeping from Stalin’s Russia to Civil War Spain, from Aztec Mexico to pre-war Poland, and from Hitler’s Berlin to Churchill’s London a compelling story of treasure, grand larceny, treachery, torture and murder unfolds. Eventually as Hitler reluctantly accepts that the defiance of the RAF has destroyed his chances of invasion for the moment, a violent shoot-out in Hampstead leads Merlin to the final truth...and Stalin to his gold.

I picked up Mark Ellis’ Stalin’s Gold the day I finished Princes Gate. I don’t think it necessary to tackle the two back to back, but I had the novel on hand and didn’t have reason to delay.

One of the things I liked about this installment is that begins with Frank Merlin’s personal life. It moves on to the mystery fairly quickly, but I think the insight these scenes afforded created interesting context within the narrative. Maybe I’m alone in this, but I liked seeing the detective off duty and getting to know him in a more casual setting.

Like its predecessor, the tone and humor of the piece are very English. The book also presents a detailed portrait of the political situation in Britain, Russia and Poland. I felt the mystery elaborate, but well-crafted and ultimately quite satisfying. I also liked how Ellis factored the Blitz into the action and used it to complicate the investigation process.

In a lot of ways, I think I appreciated Stalin’s Gold more than the founding installment of the Frank Merlin series. The storytelling felt tighter and the action more engaging. The ending was a little drawn out for my tastes, but I was quite pleased with the time I spent on the book.

He couldn’t stop thinking about it. Gold worth over $6 million. He knew in his bones that his people had got the count right. Perhaps more than $7 million. That gold no longer existed on paper. Would its loss be noticed?