Tristan and Iseult by J.D. Smith 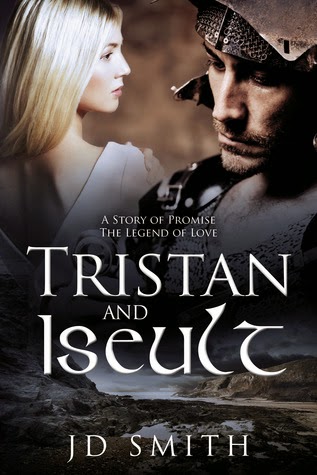 In a land of fog and desperate tribes, Tristan fights to protect western Briton from Saxon invaders. In the wake of battle, he returns to Kernow bearing grave news, and the order of power shifts. As Tristan defends the west, his uncle, King Mark, faces enemies to the east beyond the sea: the Irish Bloodshields. Mark is determined to unite the tribes of Briton and Ireland and forge an alliance that would see an end to war and the beginnings of peace. Iseult, the daughter of Irish kings and a woman of the blood, resigns herself to her inevitable fate: marriage to Lord Morholt. A bloody duel changes her course, and she finds herself stranded on the coast of Kernow bringing with her the possibility of peace. But when she loses her heart to one man and marries another, her future and that of Briton flutters grey. Three people and a hope that will never fade, this is a story of promise; the legend of love.

Retellings are an interesting subgenre. The writing and tone are exclusive to the author who put pen to page, the plot is borrowed, and the characterizations, atmosphere and theme an odd combination of both the familiar and authentic. The best retellings strike a balance. They are built within the framework of the original material, but bring something new to the table, something surprising and/or unexpected.

I give J.D Smith a lot of credit, her telling of Tristan and Iseult is true to the tragic romance, but she makes it her own in a way I not anticipated. I admire that and feel the double take I experienced while reading her work speaks to her skill as a storyteller. Like other readers, I was impressed with what she achieved in only 220 pages, but I admit I wasn't as enchanted with other aspects of the narrative.

I didn't like Smith's decision to write in the first person. I realize I'm in the minority here, but I found Smith's tone bland and monotonous. I felt Tristan's voice and personality difficult to differentiate from that of Iseult and that bothered more than I care to admit. I also felt it took a long time for things to get interesting and confess it wasn't until the appearance of Cunedda's second youngest daughter in the final chapters of the novel that I found myself genuinely engaged in Smith's story.

There were moments, enough to make the time I spent with Tristan and Iseult worthwhile, but Smith's wasn't the breathtaking tale I'd hoped for and while I wouldn't hesitate to recommend it, I can't help doubting its ability to hold its own again other adaptations.

It occurs to me now that Mark's decision did indeed come after. That is why I am to fight the Irish Lord. To prove my worth as a man of Kernow, as the nephew of a great king. Or perish at the hands of a more skilled warrior.