A Splendid Gift by Alyson Richman 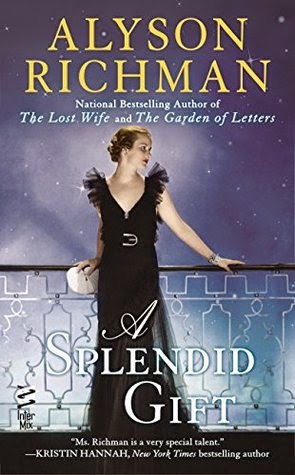 March, 1942: Declared medically unfit to fly while France is beseiged by war, Saint-Exupéry languishes in homesick frustration, unable to aid his country—and unable to write. While his publisher tries in vain to ease the author’s mind, Saint-Exupéry meets the enchanting Silvia Hamilton at a cocktail party. Though they do not share a language, they are nonetheless drawn to each other, and where words fail them they find other forms of communication. In the proceeding months, Silvia’s warmth and grace give Saint-Exupéry the peace of mind he so desperately needs. And as their love affair flourishes, he finds himself inspired to tell a tale of such simplicity and beauty that a person of any age could find joy and comfort in it. With Silvia as his muse, he works furiously to compose his petite prince.

I often question writing reviews for novellas. They are so short that I wonder if commentary has any value, but review is what I do and page count in not indicative of one's ability to write so exercising prejudice seems an unreasonable alternative. Take Alyson Richmond's A Splendid Gift. The piece is only fifty-four pages long and half of it is dedicated to an excerpt from The Garden of Letters, but that doesn't make it any less enjoyable.

A biographic fiction, the short centers on the affair between Silvia Hamilton and Antoine de Saint-Exupéry, author of The Little Prince. It's a touching piece and illuminating in its way, but my favorite aspect of the story is how it showcases Richman's talent as a storyteller.

Like The Lost Wife, A Splendid Gift isn't about the destination, but the journey that led there. Richman emphasizes emotional experience and I appreciate how deftly she was able to capture hope, loneliness, and love in simple, but poignant prose. Her characters are distinctive and relatable, but flawed and while I'd have welcomed more time with both Sylvia and Antoine, I greatly enjoyed the insight Richmond's brief tale afforded their romance and the influence it had on his work.

His sorcery was instead funneled into his work, polishing every sentence until it gleamed like a wet stone. He was determined that the message of his story be universal , regardless of the reader’s age.