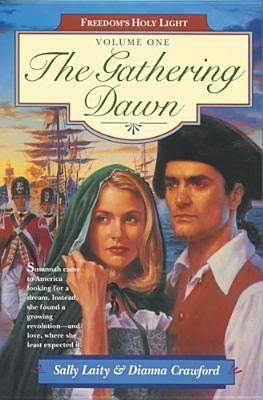 Susannah Harington, a beautiful young Englishwoman, comes to America to build a new life in the Colonies, only to find he dreams dashed before they even begin... Barely does she set foot on American soil before she is embroiled in the schemes and intrigues against the British Crown... Daniel Haynes is a bold and courageous post-rider, whose Christian beliefs more him to work secretly in the fight for freedom from England... and whose revolutionary activities put him in constant danger... Amid the conflict and drama of the Colonies in uprising, these two people meet, drawn together by circumstance and unexpected emotions. But tragedy and treachery separate them, and only their faith in God - and a miracle - can bring them together again. A gripping drama of love and triumph is set against the colorful backdrop of pre-Revolutionary America.

I get a lot of flak from fans of Christian lit. To each their own, I'm not holding any grudges, but I ruffle feathers and there's nothing wrong with acknowledging the fact. I understand where it comes from and I don't mean to make waves, it’s just something that happens. I have this silly idea that religion is a theme and shouldn't overwhelm every element of the story, I have a problem with characters who can do no wrong and I think most authors in this genre have trouble with heavier material. Thing is, a lot of these stories also have historic twists, so despite my difficulties, I keep coming back.

What does this have to do The Gathering Dawn by Sally Laity and Dianna Crawford? Well, The Gathering Dawn is actually one of the first Christian titles I ever read. I loved it and it stands as proof that I don't hate every Christian title I tackle. I've actually reread it a couple of times and truth be told, I've been itching to revisit it since 2011 when I reviewed Rose's Pledge. The Harwood House series reunited Laity and Crawford and it had a lot of great things going for it, but I struggled with the similarity it bore to their Freedom's Holy Light series, particularly books one and two, The Gathering Dawn and The Kindled Flame.

So, did I discover anything interesting? Did my opinion change with age and experience? Not really. The books are scarily similar in places, but I think the older series superior in a lot of ways.

Both dig into the realities of indentured servitude, but the location of the Lyon's Den and the unique make-up of its staff and patrons provide a better platform than Miss Harwood's adventure in the wilderness. The reader witnesses the legalities of Susannah’s circumstances when she negotiates her contract, is exposed to the social consequences of her decision in various ways day after day after day, and sees the harsher truths of her position through Mary Clare and Christopher. These are things Rose’s venture didn’t afford and once again left me wondering why the authors recycled the idea nearly two decades later. Were they hoping no one would notice?

There is a considerable amount of deeply religious dialogue and reflection in the novel, but it makes sense in context of the story. Jonathon, Steven, Morgan, Robert and Daniel all study at Princeton, a college who sought to train men to become ‘ornaments of the State as well as the Church,’ so theological discussions of faith fit the situation. A cameo appearance by English Anglican cleric George Whitefield allowed Laity and Crawford to delve even further into the subject, but again, the scene felt perfectly natural within the framework of the story.

I personally love the heightened sense of drama illustrated in Susannah's relationship with Ted as the siblings find themselves on opposites sides of the colonial move for independence. Julia's story line is sad, but I couldn't help appreciating Laity and Crawford’s attempt to incorporate tragedy into their narrative, especially when so many of their peers focus on happy endings for all. Silas’s struggle echoes the same idea and at risk of sounding like a broken record, I appreciate the courage the authors exhibited in taking a fairly light piece to such a difficult place.

The writing itself isn't my favorite, but I think The Gathering Dawn a fun piece nonetheless. It's a wonderful cornerstone for the series and illustrates the balance of faith and fiction I hope to find every time I venture to into inspired fiction.

"To the British," Reverend Cooper added, "you'll appear as just one of many postriders. But your route will fluctuate according to need. Among yours other courier duties, Daniel, you'll be informed of ships that must be unloaded in secret. You'll relay word to the other patriots and arrange help for the transfer of cargo to shore." His eyes twinkled as a smile spread over his face. "Sounds a bit more 'helpful,' does it not?"