The Executioner’s Daughter by Jane Hardstaff 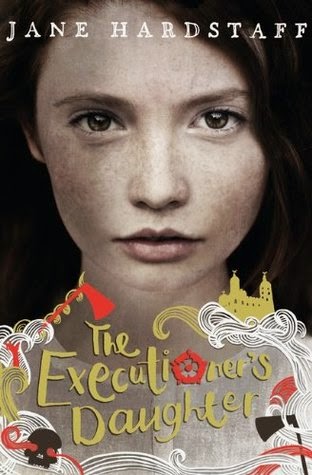 Thrilling adventure set in the underbelly of the Tower of London and on the Thames in Tudor times. Moss hates her life. As the daughter of the Executioner in the Tower of London, it’s her job to catch the heads in her basket after her father has chopped them off. She dreams of leaving, but they are prisoners with no way out. Then Moss discovers a hidden tunnel that takes her to freedom, where she learns that her life isn’t what she believes it to be and she doesn’t know who to trust. Her search for the truth takes her on a journey along the great River Thames. Could the answers lie deep in its murky depths?

If I learned anything from Jane Hardstaff's The Executioner's Daughter, it's that Egmont and I define 'thrilling adventure' very differently. I mean no offense, but I struggled with this piece, more so than I care to admit considering it is young adult lit. I'd considered abandoning it early on over its juvenile prose alone, but when push comes to shove I'm a bit of a stubborn mule and surrender doesn't come easy.

I suppose the biggest difficulty I faced, was a lack of empathy for Moss. Hardstaff tried, but the character didn't interest me in the least and I was incredibly disappointed with how she was presented. She's supposed to be eleven, but there is nothing childlike in her makeup and that fact didn't sit well with me, not when her age is so important to the story at hand.

The plot posed another problem in that it was all over the place. Moss' eavesdropping seems preposterously implausible, as did her sojourn to Hampton Court. Anne and Henry's appearance makes absolutely no sense within the context of the narrative and don't get me started on the ridiculousness of the ragged man or the Riverwitch. Elizabeth C. Bunce made this idea work in A Curse Dark as Gold. Hardstaff not so much.

The Executioner's Daughter was obviously a miss in my book, but I will confess to a moment of genuine delight. "Gather round, gather round an’ watch,” said Salter. “'Watch carefully, ladies and gents.' He bent down and whisked off the cloth from the box. The smell of the taffetys wafted into the night air. 'Fresh taffetys, lovely as you like!'" It's a short scene, hardly worth mentioning really, but the gutter snipe's little stunt put a grin on my face. I was singing Tobias Ragg by the time I finished it, but I was in a good mood and that's more than I can say for the rest of book.

Bottom line, Hardstaff's debut wasn't something I enjoyed and is so disjointed and unpolished that I can't see myself recommending it on in future.

London had always been execution-mad. If there was a monk to be drawn and quartered or a Catholic to be burned, the people liked nothing better than to stand around and watch. Preferably while eating a pie. But you couldn't beat a good beheading. That’s what the Tower folk said. Up on the scaffold was someone rich. Someone important. Maybe even a Royal. That’s what people came for. Royal blood. Blood that glittered as it sprayed the crowd. It made Moss feel sick just thinking about it.