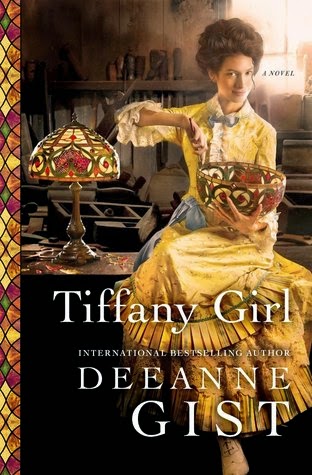 From the bestselling author of It Happened at the Fair and Fair Play comes a compelling historical novel about a progressive “New Woman”—the girl behind Tiffany’s chapel—and the love that threatens it all. As preparations for the 1893 World’s Fair set Chicago and the nation on fire, Louis Tiffany—heir to the exclusive Fifth Avenue jewelry empire—seizes the opportunity to unveil his state-of-the-art, stained glass, mosaic chapel, the likes of which the world has never seen. But when Louis’s dream is threatened by a glassworkers’ strike months before the Fair opens, he turns to an unforeseen source for help: the female students at the New York Art Institute. Eager for adventure, the young women pick up their skirts, move to boarding houses, take up steel cutters, and assume new identities as the “Tiffany Girls.” Tiffany Girls is the heartwarming story of the impetuous Flossie Jayne, a beautiful, budding artist who is handpicked by Louis to help complete the Tiffany chapel. Though excited to live in a boarding house when most women stayed home, she quickly finds the world is less welcoming than anticipated. From a Casanova male, to an unconventional married couple, and a condescending singing master, she takes on a colorful cast of characters to transform the boarding house into a home while racing to complete the Tiffany chapel and make a name for herself in the art world. As challenges mount, her ambitions become threatened from an unexpected quarter: her own heart. Who will claim victory? Her dreams or the captivating boarder next door?

I often refer to myself as a cover slut so what I'm about to admit may come as something of a shock, but I hate the artwork on Deeanne Gist's Tiffany Girl. The dress is entirely unsuitable for the Flossie's occupation, she works on windows not lamps, and the model's pose is laughable to say the least. The Gibson Girl bouffant isn't bad, but nothing about this jacket draws me in or excites my imagination, a trait it shares with the content it cocoons.

I liked a lot of the material, but I can't help feeling Gist lost control of the story. Flossie's employment at Tiffany's should have been more than enough, but her passion for painting invalidated the value of her professional position and while her coworkers had potential, they paled next to the residents at Klausmeyer’s boardinghouse. The World's Fair scene is well-done, but it is of minimal importance to the story and Flossie's effort to reinvent herself as a "New Woman" doesn't hold a candle to Reeve's story line. The end result isn't bad, but it is disjointed and rather incohesive.

Since I'm on a bit of a roll I might as well admit that I found Gist's heroine insufferably irritating and shallow. I mean no offense, but Flossie rubbed me the wrong way from the start. Her mother had some very interesting qualities and I found Mrs. Dinwiddie delightfully endearing, but Flossie herself missed the mark. Reeve was a challenge, but his personality comes to light much slower than those of his peers and while I never fully warmed to him, I think the metamorphosis of his character the most intriguing element of the narrative.

A handful of readers have expressed distaste for Gist's illustration of physical love and while I don't agree with their analysis, I will say I was caught off-guard by the following.

Great Caesar’s ghost, but her lips were soft. She flung her arms around his neck and pressed herself against him. He tried to deepen the kiss, but she didn’t understand. He pulled his mouth away and began to taste and nibble and kiss every inch of skin he had access to. Her neck, her jaw, her cheeks, her nose, her eyes, her forehead, her ears, her hair. Die and be snagged, but he wanted to run his hands through it.


I did a double-take. Were they actually making out?

Instead, he found her mouth again and wrapped his arms clear around her. “Open your mouth, magpie.”
“What?”
He kissed her, really kissed her.
She made mewling sounds. She raked her fingers through his hair. She twisted against him.


Mewling sounds? Like a cat? Who knew Reeve Wilder could pull a Harry Burns.

He knew his bed was mere steps away. The temptation was huge. Enormous. He had to get her out of here. “We have to stop.”
But she didn’t let him go. Finally, he could take it no more.
He broke their kiss and held her at arms’ length. “You better get out of here. Now.”
Her lips were full, her cheeks red where his whiskers had scratched her, her hair mussed. She pressed her hands against her stomach. “Reeve, I . . . I feel so—”
“Out,” he barked, then spun her toward the door.


Okay, it's not exactly Fifty Shades of Grey, but electricity, temptation and carnal attraction are not subjects usually found in nonsecular lit.

This, however, isn't the scene everyone is talking about. No, it's the wedding night that is making waves, but personally, I can't say the moment lived up to the rumors it's spawned. The scene is dominated by dialogue that brings closure to the characters' emotional journeys. There are a few lines of banter about becoming a woman and a flirtatious debate over the best part of a wedding, but that's as far as Gist goes. The groom does take off his bride's dress and she is described as standing before him in her chemise, bloomers, corset, and stockings. They kiss and the scene ends with hardly a fraction of the desire witnessed above.

Was I offended by this intimacy? No, but that's just me. I understand why some are uncomfortable, but I personally thought the scene intensely creative. Yes, they've shed their wedding attire, but Victorians dressed in modest layers so their undergarments aren't quite as revealing or provocative as contemporary lingerie and call me crazy, but I liked that Gist used that fact to her advantage. Since page one, both of these characters have sought acceptance and here they stand, entirely vulnerable, but recognized and appreciated for who and what they are. I might be alone in this, but I feel the scene a commendable metaphor for the themes expressed over the course of the story.

Bottom line, Tiffany Girl had its moments, but I personally felt them too few and far between. I like the imagery set forth in the premise, but I don't feel Tiffany glass or the World's Fair played enough of a role in Flossie Jayne's story. I liked the emotional drama she and Reeve experience, but feel it overshadowed by an overabundance of plot. I appreciated the light humor and essential themes of Tiffany Girl, but I was disappointed with Gist's execution. I'd recommend it as a beach read, but would have difficulty endorsing it alongside One Thousand Porches or Maids of Misfortune.

Of late, he found he didn’t really think of Miss Jayne as a New Woman. Even though she called herself one, she didn’t entirely fit the mold, at least not the mold presented on the lecture platforms and in print. She didn’t have a chip on her shoulder. She didn’t malign men or call them tyrants. She didn’t argue that his gender’s only desire was to make women cower, cringe, and be helplessly dependent, always ministering to man’s wants, whims, and fancies. Not once had he heard her even hint that men were selfish, violent brutes greedy for power, or that they wished only to have the companionship of an inferior rather than one who was his equal. No, she wasn’t a New Woman, she was simply a naive girl trying to make her way in a man’s world.

I haven't read any of this author's books yet - I think I have a few on my kindle. I have been interested in seeing how this one panned out because I find the Tiffany tie in to be interesting. The somewhat romance thing doesn't bother me and as you describe it, it sounds very interestingly written. Thanks for the review.

I'm glad that came through. Gist is getting a fair amount of flak for this piece and I'd hoped to offer an alternative interpretation of her work.