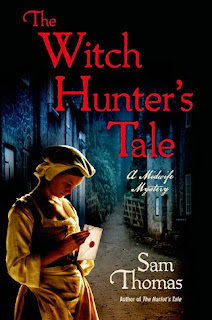 Sam Thomas takes readers back to Puritan England with midwife Bridget Hodgson, hailed by the Cleveland Plain Dealer as "one of the most fascinating detectives in contemporary mystery fiction." Winter has come to the city of York, and with it the threat of witchcraft. As women and children sicken and die, midwife Bridget Hodgson is pulled against her will into a full-scale witch-hunt that threatens to devour all in its path, guilty and innocent alike. Bridget—accompanied once again by her deputy Martha Hawkins and her nephew Will Hodgson—finds herself playing a lethal game of cat and mouse against the most dangerous men in York, as well as her sworn enemy Rebecca Hooke. As the trials begin, and the noose begins to tighten around her neck, Bridget must answer the question: How far will she go to protect the people she loves?

Sam Thomas taunted me. Not intentionally, I don't really know him and I don't think he has particular issue with me, but he mentioned The Witch Hunter's Tale in a January 2014 interview, more than a year before the novel's release, and I about lost my mind waiting for it to become available. Week after interminable week, there I was cooling my heels and twiddling my thumbs, but relief finally came and I'm glad to say I wasn't disappointed.

Thomas has a remarkable understanding of seventeenth century life. He fills his stories with a wealth of social and historic detail, but I'm always amazed by his chosen point of view as each of his novels is written from the perspective of a midwife. I don't mean to split hairs or get into some sexist debate, I'm simply awed and amused that I owe such excellent exposition to someone who wouldn't have been welcome in the birthing room.

Bridget Hodgson is a wonderful character, but I think this my favorite of her stories. She grows in unexpected ways as she wrestles with the idea of justice and man's manipulation of the law. She is forced to make sacrifices, change her view of the world and even act in ways she wouldn't normally consider appropriate. She becomes a more dynamic and complex individual in this installment of the Midwife Mysteries and that transformation really appealed to me.

My favorite element of the story, however, was Bridget's nemesis, Rebecca Hooke. There is a cold brilliance to the woman, a deviousness I absolutely adore. If you haven't done so, I highly recommend reading The Maidservant and the Murderer as the novella offers wonderful insight to her personality. Bridget is fun, Martha is clever and Helen is wickedly alluring, but Rebecca is shrewd, conniving, and duplicitous. She is the perfect foil, an adversary who is as fascinating as she is egoistic.

I don't mean downplay the earlier novels, but I think The Witch Hunter's Tale the best of the series thus far. Thomas has a way of keeping his readers on their toes, of holding a twist until the last possible moment and catching his audience off-guard with a curve ball they never saw coming, but the themes he explored here and the depth he illustrated in his players were beyond anything I expected and came together in a memorable and thoroughly entertaining fiction.

“The first case we will hear is that of Mother Lee,” the clerk announced. “The charge is the most damnable sin and crime of witchcraft.” A door behind the bench opened, and two bailiffs led Mother Lee, shackled hand and foot, into the courtroom to begin what would be her last day on earth.