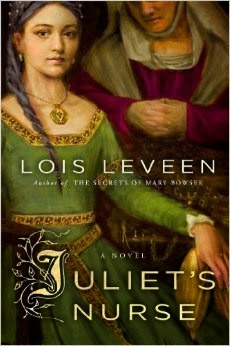 An enthralling new telling of Shakespeare’s Romeo and Juliet—told from the perspective of Juliet’s nurse. In Verona, a city ravaged by plague and political rivalries, a mother mourning the death of her day-old infant enters the household of the powerful Cappelletti family to become the wet-nurse to their newborn baby. As she serves her beloved Juliet over the next fourteen years, the nurse learns the Cappellettis’ darkest secrets. Those secrets—and the nurse’s deep personal grief—erupt across five momentous days of love and loss that destroy a daughter, and a family. By turns sensual, tragic, and comic, Juliet’s Nurse gives voice to one of literature’s most memorable and distinctive characters, a woman who was both insider and outsider among Verona’s wealthy ruling class. Exploring the romance and intrigue of interwoven loyalties, rivalries, jealousies, and losses only hinted at in Shakespeare’s play, this is a never-before-heard tale of the deepest love in Verona—the love between a grieving woman and the precious child of her heart. In the tradition of Sarah Dunant, Philippa Gregory, and Geraldine Brooks, Juliet’s Nurse is a rich prequel that reimagines the world’s most cherished tale of love and loss, suffering and survival.

I'm not a huge fan of Romeo and Juliet, but Lois Leveen's Juliet's Nurse caught my eye. Many of my favorite reviewers were touched by the author's handling of Shakespeare's classic and many were impressed with her interpretation of his characters, but having read the novel, I can't say I'm in agreement with their admiration. The story proved a pleasant enough diversion, but it wasn't quite what I'd expected going in.

First and foremost, the story is horrendously slow. The first half takes place during Juliet's first three years of life, but remarkably little happens during this period. The author introduces many familiar characters - Angelica, Juliet, Tybalt, Friar Lorenzo, Lord Cappelletti and his wife - but she wallows in their backstories for chapters at time, utterly ignoring the fact that readers are familiar with these individuals and the circumstances that brought them together.

Another thing I struggled with was Leveen's tendency to repeat herself. Take for example, the deaths of Angelica's children. I was so overexposed to this concept that I didn't care for the loss she suffered and the indifference that bred, crippled the story's central theme. I realize Leveen was trying to draw on the sympathies of her audience, but I found her excessive reiteration desensitizing and dull.

To top things off, Leveen's heroine bored me. It wasn't until the final third of the narrative that I felt Angelica took an active role in the story, but I couldn't help feeling the moment came too late. I'd checked out long before Leveen's fiction began to overlap Shakespeare's timeline and while I'm happy with the author's intent, I felt the execution lacking.

Contrary to what you might think, there were elements in Juliet's Nurse I liked. Leveen's handling of plague and its impact on seventeenth century life was quite interesting and there were moments involving Lady Cappelletti that had genuine potential, but neither proved compelling enough for this particular reader. I feel the story a nice nod to the play on which it is based, but in all honesty, I don't think the author brought enough imagination to the table.

A plague on both your houses. If Mercutio’s many fornications are not enough to send him straight to hell, for this spiteful oath alone he deserves damnation.

I really liked this one, but I think the fact that I listened to this on audiobook (and loved the narrator) and that I couldn't remember much about Romeo and Juliet although I did read it years ago helped me love it as much as I did. I only had a vague remembrance of most of the characters so the time spent on introducing them helped jog my memory :).

That's interesting! Over at GR I'd mentioned the book being better for those you'd loved the play but someone came back and said she felt it didn't do justice to Shakespeare. I think this is just one of those hit and miss pieces. Love or you don't. Not a lot of middle ground.