Island of Wings by Karin Altenberg 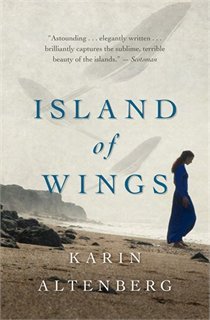 A dazzling debut novel of love and loss, faith and atonement, on an untamed nineteenth-century Scottish island. Exquisitely written and profoundly moving, Island of Wings is a richly imagined novel about two people struggling to keep their love, and their family, alive in a place of extreme hardship and unearthly beauty. Everything lies ahead for Lizzie and Neil McKenzie when they arrive at the St. Kilda islands in July of 1830. Neil is to become the minister to the small community of islanders, and Lizzie—bright, beautiful, and devoted—is pregnant with their first child. As the two adjust to life at the edge of civilization, where the natives live in squalor and babies perish mysteriously, their marriage—and their sanity—are soon threatened.

St. Kilda is an archipelago some 40 miles from North Uist on the western edge of Scotland. Geographically remote, isolation emerged as the predominant theme of life in this sequestered corner of the world. Nowhere is this concept better illustrated than in Altenberg's portrayal of Lizzie McKenzie. Newly married and pregnant, Lizzie views St. Kilda as an adventure. Soon after her arrival, her fantasies are shattered by tragedy and she is forced to acknowledge the true nature of her situation. Removed from the natives by a difference of both culture and language, Lizzie must push the limits of her own character or perish.

Historically, Altenberg did her homework in regards to both the islands and their inhabitants. The descriptions of the native culture were extraordinarily detailed and skillfully folded into the plot. The additional exploration of the nature of faith, ethics and the relationship between a man and wife added an appealing emotional quality to the novel. Thoroughly impressive as Island of Wings is Altenberg's debut novel.

The flowery prose is somewhat overwhelming but underneath there exists a captivating story of hope and commitment. There is no denying that Island of Wings is a beautiful interpretation of the harsh realities of life on St. Kilda but is also a insightful tale of human nature and our ability to overcome. Powerfully moving if one can navigate the composition.

Recommended to fans of Confessions of a Pagan Nun: A Novel by Kate Horsley and the Women of Genesis series by Orson Scott Card.

Time was no longer linear in this place where no one could remember who built the houses, cleits and dykes and where the seasons were marked by the comings and goings of the migrating birds. The ancestors were near the living, and the world of men was closely linked with the rock, the sea and the birds with which they shared these elements. Time and space seemed suspended, so that here and now was always and everywhere.